Here’s a summary of activity for the week ending August 2nd, 2014. 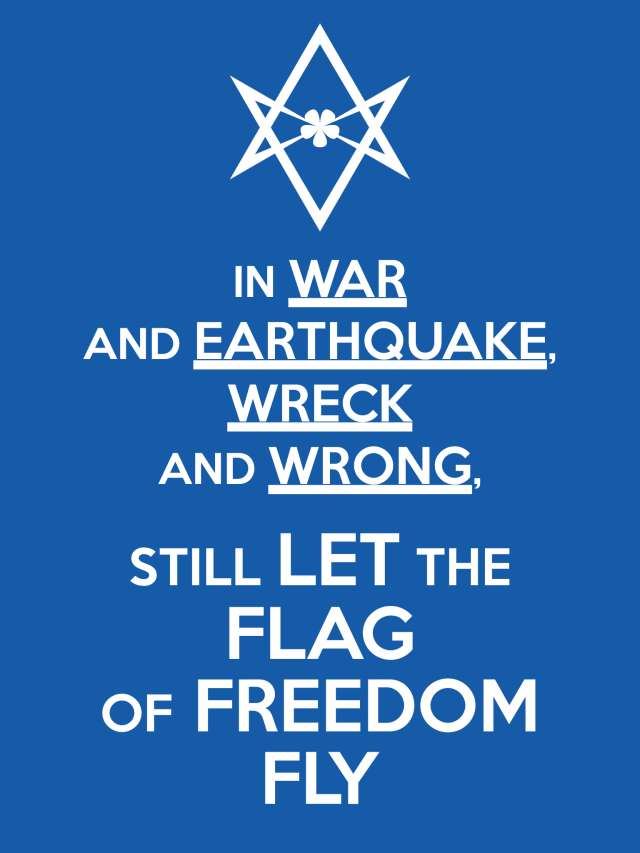 This Unicursal LET THE FLAG OF FREEDOM FLY Poster is another piece of helpful propaganda from the Ministry of Information, a take on the original trilogy of British posters from WWII combined with a quote from Aleister Crowley’s A Hymn for the American People from International, Vol XII Iss 3 (March, 1918).

There’s less than two weeks left for submissions to Magick, Music and Ritual 10 before the deadline on August 15th, 2014. This will the the one and only Hermetic Library album released this year, so the time to get involved is now. Also, the best way to add anthology releases and this upcoming Hermetic Library album to your personal music collection is through the Patron campaign at Patreon.

The Palace by Rudyard Kipling

Guerrilla Theurgy, Videos, Cards, Angels is a crowdfunding effort by Jason Augustus Newcomb
Ultraculture Journal: Essays on Magick, Tantra and the Deconditioning of Consciousness (Volume 1) from Jason Louv, et al.
Afterlife With Archie by Roberto Aguirre-Sacasa and Francesco Francavilla
Party at the World’s End by James Curcio
Surrealism and the Occult: Occultism and Western Esotericism in the Work and Movement of André Breton by Tessel M Bauduin
Band of Angels: The Forgotten World of Early Christian Women by Kate Cooper, from Overlook Press
Lucifer Rising shirt on offer by Jimmy Page
Magic and Masculinity: Ritual Magic and Gender in the Early Modern Era by Frances
The Isis Oracle: Divination Plate and Speaking Stones by Surcadiana
Do What Thou Wilt shirt from 6DollarShirts

Candlelit Evenings at Museum of Witchcraft on first Saturdays through Oct, 2014

This Land Is Mine, an animated video by Nina Paley, to Ernest Gold and Pat Boone’s “The Exodus Song” sung by Andy Williams
July 23rd, 1973 from DMITV with music by Chapel Supremesus
Omnium Gatherum: July 20th, 2014, an irregular hodgepodge of links gathered together …
Christians listening to Stairway to Heaven forwards, a video from clemtinite

The Body of Light in the Western Esoteric Tradition
The Sepher Yetzirah: The Book of Creation
The Chaldean Oracles
Enochian Pronunciation Guide — Phonetic Guide
Malkuth