Hermetic Library fellow T Polyphilus reviews The Man in the Bowler Hat: His History and Iconography by Fred Miller Robinson. 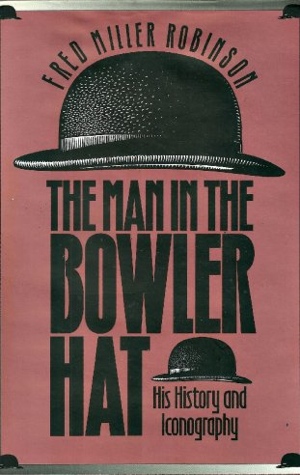 I took my time reading this book, which is a social history drawing on fashion, art history, literary criticism, film studies, theater, and other disciplines, constellated around the image of the bowler hat. Author Robinson takes the bowler as a quintessential icon of both modern consciousness and consciousness of modernity, and he follows its chief cultural appearances from its 19th-century invention, all the way through the 20th century.

The argument addresses such cinematic instances as Chaplin’s “little man,” the work of Laurel and Hardy, and A Clockwork Orange. Various painters are considered, but Magritte gets his own chapter, of course. There are high-resolution black-and-white illustrations throughout the book. [via]