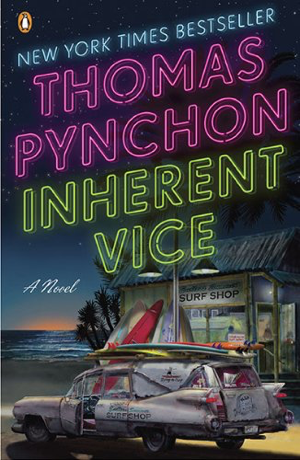 Somehow Inherent Vice is the first Thomas Pynchon book I’ve read. Generally I found this book to be delightfully unexpected, as I simply didn’t know what I was missing; a little bit Thompson gonzo, a little bit Tom Robbins …

In specific, however, I realized somewhere near the middle of the book that I did not care at all about any of the characters, and felt detached from them and the story. Normally I find myself daydreaming, and thinking, and pausing to consider, and visualizing scenes and blocking and performance; but, in spite of the delightful intellectual trip in the story and writing, I was not particularly moved in any other way. I neither liked nor hated anyone in this story, and the action was not visceral to me. However, as I mentioned, it was definitely a fun intellectual trip in both style and substance.

Except for one thing that just rubbed me the wrong way. I recognize that the author has a particular and peculiar vernacular use of the apostrophe, a style. However, every time I saw “seeing ‘s” in the text, my skin crawled. , but the way it was seems completely wrong to me. First, this contraction of “seeing as” might be confusingly rendered as “seeing’s” though that seems more proper to me, as a contraction. Second, if this isn’t a contraction, but rather an indication there’s a full stop, then … no one actually talks like that, do they? Bah. Allergies. [via]