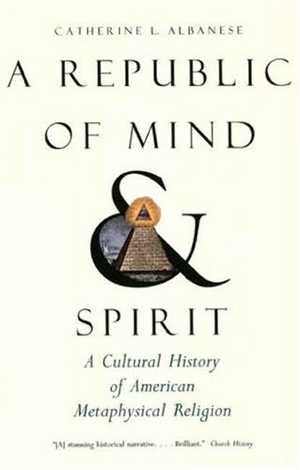 In A Republic of Mind and Spirit, Catherine L. Albanese has produced a deservedly lauded treatment of a key trajectory in American religion. She benefits from having read and considered earlier authors writing about “harmonial religion” and “metaphysical movements,” and her chief difference with them concerns the centrality of what she calls “metaphysical religion,” relative to American society as a whole. She also provides some additional interpretive lenses that help to support her evaluation. Finally, she is able to furnish an account of later developments, closing out her twentieth-century history of the metaphysical religious orientation and moving into the twenty-first.

Albanese straightforwardly applies the word religion to this cluster of traditions, whereas others have preferred movements and philosophies. Albanese’s deployment of the category of ‘religion’ reflects the increasingly etic use of the term over recent decades by scholars who apply it to cultural configurations that don’t proclaim themselves as religious, such as forms of entertainment and political organization. For Albanese, religion is a collective and discursive phenomenon, so that she can refer to Americans who share in “the religious language called metaphysics” (9).

She also makes magic a pivotal feature of the metaphysical terrain. By proposing a distinction between the “material magic” of externally manifested symbolism and the “mental magic” internal to consciousness, she is able to assimilate to the latter category all of the metaphysical realizations and redemptions that might have otherwise resisted the designation of magic. She points out that mental magic tends to predominate over material magic in the metaphysical traditions, but by making these two into different expressions of a shared impulse, she provides an important thread running throughout the metaphysical orientation, as contrasted to the evangelical and institutional views of religion. The concept of magic helps her to demonstrate some deep resemblances between metaphysical developments as diverse as mesmerism, Religious Science, voodoo, and neopaganism. ‘Magic’ also places worthwhile emphasis on the practical, performative dimensions of metaphysical religion, in contrast to the more doctrinal focus of earlier authors on the topic.

Albanese is however scornful of the terms ‘esoteric’ and ‘occult,’ with their etymologies indicating things secret and cryptic. She worries about the Continentally-inflected elitism of the ‘esoteric’, witchcraft slanders against the ‘occult,’ and the heresiological legacy of the ‘gnostic.’ In her expression of these misgivings she sets herself against prior scholars of the field as Wouter Hanegraaff (‘esoteric’), Jon Butler (‘occult’), and Sidney Ahlstrom (‘gnostic’). But there are also problems with her claims for the openness and exotericism of American metaphysical religion.

Albanese certainly gets it wrong with respect to eighteenth- and nineteenth-century Freemasonry, when she insists that “the esoteric became exoteric…in the wake of the declassified secret.” No matter how virally the Masonic institution might have been propagated, and no matter how many alleged exposures were published, the secrets were never “declassified” by the lodges. No matter how egalitarian the professed ideals of Freemasonry may have been, it was also always elitist in its most fundamental structures—voting to exclude applicants as well as to include members, and instilling in every initiate a ritually-heightened sensitivity to the power of secrecy. Similarly, when she writes that “the esoteric turned…exoteric” in Christian Science, she is neglecting the hierarchy and procedural secrecy that characterized Mary Baker Eddy’s mode of organization, and which helped to make it appear ‘occult’ to her contemporaries.

Confidential doctrines and ritual secrecy have also been conspicuous features of metaphysical religions emergent in the twentieth century, such as Scientology and many forms of neopaganism. Having come to the late twentieth century, Albanese writes:

“[T]here was nothing secret, or esoteric, in what Americans were pursuing. The nonsecrecy had been a fact since the mid-nineteenth century, when mass spiritualism—with its collection of trance-produced books seemingly a dime a dozen—had opened Hermetic secrets to American takers. Now the media had made even surer of the exotericism of what was transpiring, and New Age people cooperated enthusiastically.” (37)

But secrecy did continue. There is no essential conflict between public announcements of groups and secret instructions to their members. Look at the AMORC ads in the back of old issues of Popular Mechanics (“These men were Rosicrucians!”) and consider that the Rosicrucian lessons their members received in the mail were strictly confidential. And more importantly, the most egalitarian, autodidactic, publicly confessional New Ager may still partake of the essential esotericism involved in cognizing that the truth she prizes is super-rational, and therefore the ‘secret’ can only be attained through personal experience. The title rhetoric of Marylin Ferguson’s Aquarian Conspiracy attests to the sense in which intimations of a secret were instrumental to propagating the late-twentieth-century New Age just as they were for Freemasonry.

A recurrent (if not intrinsic) attribute of secrecy may seem to marginalize metaphysical religion, making it insular and elitist—it certainly sets its values in contrast to those of the secular academy. But this feature should be read as a tactical variation on the general strategy of acquiring a sacred identity through distinction and alienation that is common to virtually all successful religions in America. In her desire to proclaim the exotericism of metaphysical religion, Albanese may be falling for the seduction of the tolerant, ecumenist, ‘mainline’ ideal of American religion. Over the course of its history, metaphysical religion has desired and deserved as much ‘outsider’ status as Judaism or twentieth-century Protestant fundamentalism. This fact does not diminish its relevance; it enhances it.

Albanese has brought an impressive theoretical toolkit to bear on her understudied topic: competing historical narratives, vernacular religion, combinative culture, attention to private/public distinctions, analytics of gender and race, and perhaps most importantly, a concept of magic that is neither redundant with nor antagonistic to religion. The net effect is a study that responds to its predecessors, corrects them in important respects, and surpasses them in many. It would be foolish to imagine that A Republic of Mind and Spirit has said all that needs to be known about American metaphysical religion, but it has provided the clearest delineation of its field so far, and it has opened new topics for discussion and investigation both within that heterogeneous republic and in the history of religion generally. [via]