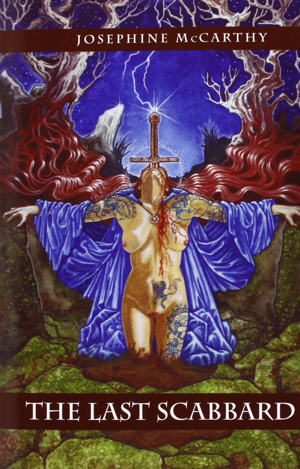 Josephine McCarthy is the author of a number of non-fiction esoteric volumes and is one of the people behind Quareia, an online school which presumably follows a similar curriculum to her three-part Magical Knowledge book series, but this is a fictional story set primarily around two periods, the founding of the first temples of the Hermetic Order of the Golden Dawn and the present day, with a few bits of action set in other periods. The common thread is provided by the ancient artefacts involved which include the sword Caliburn, also known as Excalibur, and the Stone of Scone, also called Stone of Destiny, and the so-called scabbard.

Without a doubt the Golden Dawn gets short shrift again, this time as a group of foolish men who perform a ritual beyond themselves which creates a problem that ripples through time. Interesting there’s only one woman of the Golden Dawn mentioned, and then not even by name; perhaps this is a useful conceit since the foolishness of the ritual choice is posited as gender specific. But, really, can’t the Golden Dawn get a break? Canonically, the order didn’t last long, but like the Roman Empire, it continued in various forms long past its supposed demise; and I personally always come back to Mark K Greer’s The Women of the Golden Dawn with the overall impression that our spiritual Aunts of the Golden Dawn were very much involved in the order’s founding, successful operation and broad pervasive legacy.

Have you ever seen pictures of the Stone of Scone, whether you believe the images are of the actual stone or a replica? It’s giant. It weighs over 300 pounds as it appears today. So, I think you’ll understand when I choked a bit on the notion in this book that the main character held the stone for any extended period of time, let alone lifted it at all. Further, the main character, a trained specialist from the British Museum, finds herself in possession of the apparently authentic and original stone, one of the most famous objects in the history of the UK, and then proceeds to leave it in a hotel room, unattended or guarded, for hours while out for a walk. Seriously? Nope. Not even slightly believable. Denied.

The emotional life of the characters in this story could easily inspire a drinking game. If you want a game guaranteed to get you trashed by the end, then drink any time a character blushes or raises their eyebrows, without any other emotional content conveyed.

However, I’m a sucker for fictional accounts of the Hermetic Order of the Golden Dawn, which may also be of interest you. And, if you enjoy historical fantasy, such as The Mists of Avalon, then you might enjoy this tale, if you can avoid stumbling on some of the rough spots.
[via]