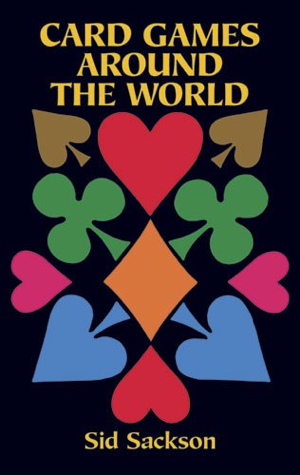 This little compendium of card game rules is the work of pioneering game designer Sid Sackson. Most of these will not be found in the usual editions of Hoyle’s. They are arranged regionally: Asia, Europe, more Europe, Britain, Latin America, and the US, with a final section of four original games, two of them by Sackson. The rules are all clear and playable, and there are some diagrams where needed, but most games pass without them.

Of the traditional games, I have played nearly all of the US games, and very few of the others. Ones I haven’t played that interest me most are the French games Piquet and Ecarte, the peg-scored game of Cribbage (now enjoying something of a renaissance), and Casino, which I had heard mentioned, but never imagined to play in the way that the rules run.

Among the new games, I am not much tempted by the Sackson offerings, which are both themed simulations of a sort: Card Football and Card Stock Market. But Ronald Corn’s Buried Treasure is intriguing, and Claude Soucie’s microgame Divide and Conquer looks even better. [via]