Hermetic Library fellow T Polyphilus reviews The Levitikon: The Gospels According to the Primitive Church by Donald Donato, introduction by Jordan Stratford. 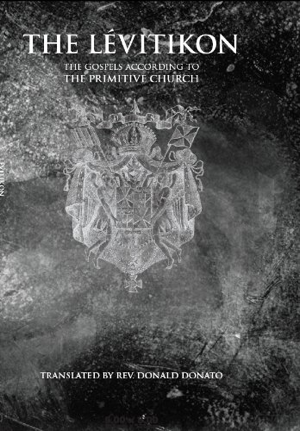 This slim softcover book is the first English translation (so far as I know) of a reasonably hoary French curiosity, but its title appears to be an error. The text is purportedly a Christian gospel of antique provenance. It was first circulated within the Église Johannites des Cretiens Primitif of Bernard-Raymond Fabré-Palaprat at the start of the 19th century. Fabré-Palaprat claimed to be the heir to the Apostolic Succession of John the Divine, and it was on this authority that he founded the “Johannite Church,” primarily to serve as an ecclesiastical vehicle for his Templar revival. The Johannite Church used a variant version of the Fourth Gospel, called the Evangelikon, as its scripture, and it is this document that forms the principal substance of the current book. The Lévitikon was the title of an companion text that asserted a transmission of mysteries from Jesus through the beloved disciple and eventually to the Knights Templar. Its contents are not present in the current volume bearing that name.

Neither the Johannite Church nor the associated Templar Order seem to have survived Fabré-Palaprat’s death in 1838, but members of the Johannite clergy appear to have continued to exercise their ecclesiastic prerogatives in other venues. The 21st-century Lévitikon is issued under the imprimatur of the Apostolic Johannite Church, a Neognostic sect operating in the French tradition for which Jules Doinel was a major founding figure. The current AJC Patriarch Iohannes IV offers a foreword here, and the introduction and translation are supplied by other AJC clergy. Although there is an international reach claimed by this church, the main figures of the hierarchy represented in this volume appear to be in western Canada.

AJC Prefect Jordan Stratford’s introduction seeks to place the enigmatic Johannite gospel in a historical context, discussing its etiology (subject to an “official” discovery yarn similar to that of the Golden Dawn cipher manuscripts in England later in the 19th century), contemporary scholarship on the orthodox Fourth Gospel (to which this one bears a closer similarity than the synoptic gospels do to one another), and the historical phenomena of initiatic transmission and Templarism addressed in the original Lévitikon (again, a text not actually furnished under the current use of that title). Stratford’s conclusions (“Possibilities”) are reasonably skeptical, and include a comparison between the Evangelikon and the successful fraud of the Donation of Constantine.

The gospel itself is a pleasant and interesting read. Like the French original, it lacks the verse numberings of modern bibles, but the biblical pericopes sit squarely in the chapter structure parallel to its canonical model or cousin. As Stratford remarks, it emphasizes the alien quality of Jesus and his teachings, often implying or stating his relationship to Greek and Egyptian culture. With these small additions, some of the features of the canonical John stood out for me. For example in John 8:33 (as in the present text), the “Jews who had believed” Jesus say, “We are the seed of Abraham, and we have never been slaves to any man: how sayest thou: you shall be free?” So these Jews and/or the gospel author seem to have been ironically ignorant of the substance of the first half of Exodus. There is no resurrection narrative in this gospel, but there is a concluding attestation.

This book is published chiefly as an inspirational text for Christian Neognostics. I do not fall within that classification, but I found it worthwhile for my interest in the history of modern Neognosticism. [via]