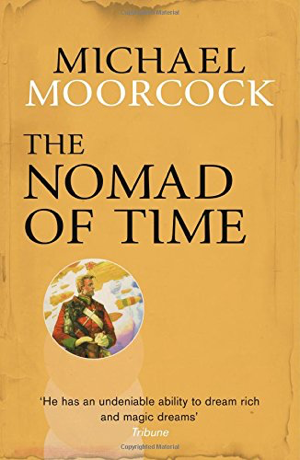 Eisenhower is reported to have said privately: “Before the bomb was used, I would have said yes, I was sure we could keep the peace with Russia. Now, I don’t know. Until now I would have said that we three, Britain with her mighty fleet, America with the strongest air force, and Russia with the strongest land force on the continent, we three could have guaranteed the peace of the world for a long, long time to come. But now, I don’t know. People are frightened and disturbed all over. Everyone feels insecure again.”

The Nomad of Time is a book club omnibus of Michael Moorcock’s three Oswald Bastable novels. These books first published in the 1970s are sometimes characterized as seminal steampunk, on account of their re-imagining of the technological development of the early 20th century, the conspicuous presence of airships, and the Edwardian character of the protagonist. (Bastable’s name is borrowed from that of a child narrator in several Victorian books by E. Nesbit.) Each of the three novels presents a variant of 20th-century history, in which geopolitical and technological conditions vary. In all, however, Bastable finds himself near the center of critical events concerning global warfare, and he comes to feel a considerable guilty responsibility for his role, although he is more victim than perpetrator.

Although the titles may evoke Edgar Rice Burroughs, if these books contain pastiche or homage to another author, it is certainly H.G. Wells, for both the scientific and political elements as well as the period setting. There is a documentary conceit established in The Warlord of the Air, according to which Bastable was an acquaintance of Moorcock’s grandfather, and the first two novels are simply presentations of text found among the papers of the older Moorcock’s estate. The third novel purports to be a Bastable manuscript delivered directly to grandson Michael through a more fantastic agency.

In this series, Moorcock gives actual historical personalities new roles in the variant histories that he presents. For instance, in The Land Leviathan Mahatma Gandhi features as the president of the idyllic South African republic of Bantustan. The “Steel Tsar” of the third book is (unsurprisingly) an otherworld variant of Lenin. The Ukranian revolutionary Nestor Makhno is conscripted to serve as a mouthpiece for some of Moorcock’s own Kropotkin-inflected political views toward the close of the third book. The 20th-century event that seems to have the greatest metaphysical significance in The Nomad of Time is the first detonation of a nuclear fission bomb. In fact, the atomic bomb is to this trilogy pretty much what the Death Star is to the original Star Wars trilogy, although Moorcock’s political sensibilities are quite different than those of George Lucas!

Bastable connects with Moorcock’s Eternal Champion hyperwork primarily through some incidental appearances in the Jerry Cornelius stories and the End of Time books. But the only intruder from Moorcock’s fantasy multiverse in The Nomad of Time is Temporal Adventurer Una Persson, who figures in all three of the Bastable books. There is one solitary mention of the dialectic of Law and Chaos in the third Bastable novel, but throughout the three, the forces of Empire and Revolution seem to be the masks worn by Moorcock’s cosmic polarity. Bastable is a professedly non-introspective character, a dogged survivor who prefers to be in the role of a man of action, but the books brim with moral anxiety and confused loyalties. [via]