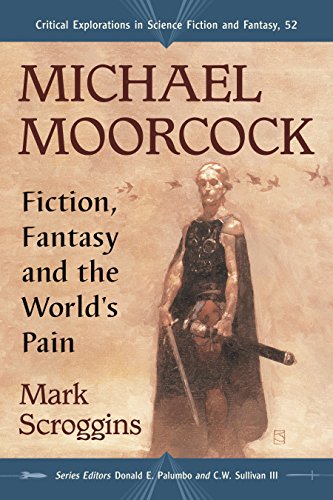 Mark Scroggins supplies a very accessible chronological survey of the many novels of Michael Moorcock, with an emphasis on the unifying themes and continuity devices that tie them—even the “literary,” non-fantastic ones—into a single oeuvre. The study covers a lot of ground rather quickly, so there is not so much deep analysis involved, but the characterizations and summaries of the books are very accurate, by my readings. Scroggins, while clearly a fan of Moorcock’s work, is a professor of English, and provides even-handed criticism of the books, pointing out failings more often than I would have.

There are six chapters, each covering a period in Moorcock’s development as an author. As someone who has read most of these books over the course of some four decades, I was grateful for Scroggins’ accounts of the omnibus editions published in the 1990s in the UK and US: which texts were included and in what sequences, and the nature of the revisions implemented by the author at that juncture.

I appreciated the view that Scroggins provided, suspending judgment on the apparent identities of character, artifact, and place across the settings of Moorcock’s multiverse, and treating these as recurrent motifs rather than simply antecedent and succedent appearances of durable entities. I recommend it as a reader’s strategy in approaching Moorcock’s work.

Moorcock has admitted an admiration for James Branch Cabell’s talents as a writer (with reservations about how he applied those talents), and although Scroggins doesn’t make this observation, he musters all the necessary detail to demonstrate that Moorcock’s Eternal-Champion-Multiverse-Moonbeam-Cosmic-Balance hyperwork is woven on a loom manufactured on the lines of the one Cabell used to create the Biography of Manuel. (Ironically, another author who ended up creating a similar fabric from scores of stories, also under the influence of Cabell, was Robert A. Heinlein, a particular bête noire of Moorcock’s.)

Having just read a trio of 1970s Moorcock novels (the Bastable books) to warm up for this volume, I have to say that it has only increased my willingness to return to the books I have overlooked, and perhaps even do a little re-reading. I’m certainly interested in Moorcock’s current trilogy, the first volume of which was published just last year. [via]