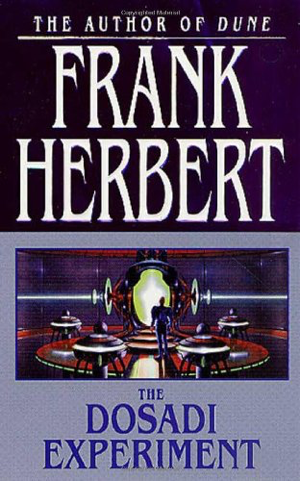 Here’s a book I looked at with interest when I was a teenager who had read and enjoyed Herbert’s Dune. I believe I passed it over then because it was the sequel to a book I hadn’t read (Whipping Star), and which wasn’t in the public library collection where I found The Dosadi Experiment. Since then, Dosadi has gone from being the second of a series to being the fourth, in the narrative chronology of Herbert’s ConSentiency novels. Still not having read the others all these decades later, I went ahead and tackled this one, inspired by praise I had read for it on LibraryThing.

It may be that I would have enjoyed it more if I had been already acquainted with the ConSentiency milieu and the protagonist (Jorj X. McKie, Saboteur Extraordinary) established in Whipping Star, but I did like it all the same. It certainly has a number of themes in common with the original Dune books, most especially the idea of a eugenic program transforming humanity. But even more it reminded me of the later Charles Stross novel Glasshouse. Both are far future espionage stories where the protagonist must infiltrate an experimental world in an effort to discover its true purpose, knowing only that there is some great culpability involved. In both cases, the world being investigated is more like the reader’s world than the somewhat utopian future of the novel’s larger scenario. In Dosadi, “The whole thing reminded McKie of stories told about behavior in Human bureaucracies of the classical period before deep space travel” (222). There are other interesting similarities between the books that would be spoilers to detail.

Unique to Herbert’s tale is the focus on the exotic legal system of the frog-like Gowachin aliens, an important peer-race of humanity within the ConSentiency. McKie is the only human credentialed as a “legum” in the jurisprudence of their “courtarena,” where both lawyers and litigants are routinely exposed to mortal hazard. Far from a crude gladiator’s brawl, however, the operations of this system depend on great subtlety and creativity, demanding both a reverence for tradition and the power to upend precedents and conventions.

This book read quickly, even though there were passages that were written with such verbal economy that they became ambiguous to the reader. That style is thematically consistent with the book, which attributes it to the inhabitants of Dosadi themselves. I don’t know how far in our future The Dosadi Experiment is supposed to be set, and it glances lightly over many technological details, but it has aged pretty well for forty-year-old science fiction. I’m glad to have finally read it, and I appreciate the recommendations that got me to do so. [via]