Hermetic Library fellow T Polyphilus reviews The Kingdom of Evil: A Continuation of the Journal of Fantazius Mallare by Ben Hecht. 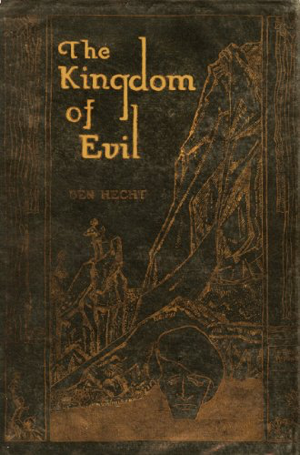 When I first read it, I would not have guessed that Ben Hecht’s Fantazius Mallare would have a sequel. Nevertheless, The Kingdom of Evil is it. This more interior and symbolic story from deep in Mallare’s derangement at first supplies more cues about the modernity of Mallare’s “real world.” Storefronts blaze with electricity, and traffic shines headlamps (9). But the bulk of the text is excerpted from Mallare’s journals, in which the misanthropic decadent has fully immersed himself in the fantasy Kingdom of the book’s title.

The flavor, and some of the substance, of this book put me in mind of Jeffrey Ford’s Well-Built City trilogy. I didn’t find the Anthony Angarola illustrations as affecting as the ones by Wallace Smith in Fantazius Mallare, but they did seem to track more closely to the text, and they suggested to me the idea of the Kingdom of Evil in an animated format, which influenced my imaginings from the story.

The end had more conclusiveness to it than that of the original volume, but still raised more questions than it answered. [via]