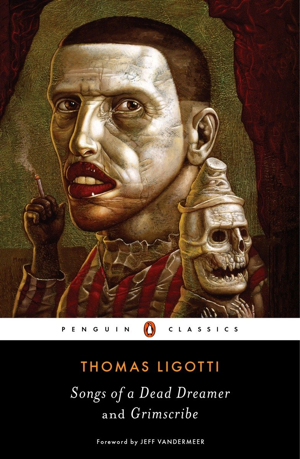 This volume collects Thomas Ligotti’s first two books of short fiction: Songs of a Dead Dreamer (1985) and Grimscribe: His Life and Works (1991), with a new introduction by Jeff VanderMeer. These stories are all in the vein of supernatural horror, but with a distinctive tenor of pessimistic surrealism. VanderMeer notably compares Ligotti to Franz Kafka, Angela Carter, and David Lynch.

Songs of a Dead Dreamer is divided into three sections: “Dreams for Sleepwalkers,” “Dreams for Insomniacs,” and “Dreams for the Dead.” Each of these ends with a story which involves critical reflexivity regarding the horror genre: “Notes on the Writing of Horror: A Story,” “Professor Nobody’s Little Lectures on Horror,” and “Vastarien,” respectively. This first collection shows many of the tropes that Ligotti uses to communicate disquiet and the uncanny: puppets, masks, vegetable growth, insects, and others. The central section “Dreams for Insomniacs” has a few tales that work in well-defined weird subgenres, such as the Christmas ghost story of “The Christmas Eves of Aunt Elise,” the vampire story in “The Lost Art of Twilight,” and sword & sorcery in “Masquerade of a Dead Sword.”

“The Sect of the Idiot,” opening with a quote from The Necronomicon, shows Ligotti’s familiarity with the Lovecraftian corpus and its virtues, but is neither a pastiche nor an instance of Yog-Sothothery per se. More Lovecraftian in its overall texture is the longest Grimscribe story “The Feast of Harlequin,” which is overtly dedicated to HPL. The things that most tie Ligotti’s work to this predecessor are a preoccupation with dreams, a philosophical pessimism, and a general effort to portray the violation of metaphysical norms.

Ligotti’s occasional representations of contemporary occultism and secret societies are highly credible, despite the anti-naturalism of his style. He affords addictive tomes, obscure ceremony, and exotic drugs, often with libidinal contexts/subtexts. Like Lovecraft, he prefers his grimoires to be as invented as his characters, but he does show a familiarity with actual occult tradition by invoking Austin Osman Spare (in “In the Shadow of Another World”). The magic employed by sorcerers in these stories is sometimes grounded in powerful hypnotic suggestion.

The stories of Grimscribe are all told in the first person by unnamed narrators, and an introduction establishes the conceit that these are received texts, drawn from a pool of consciousness through an authorial function personified by Ligotti as “Grimscribe.” These are then grouped into “Voices” characterizing the specific narrators, such as “The Voice of the Demon” (culpable narrators) and “The Voice of the Child” (juvenile narrators). The final section “The Voice of Our Name” contains only the single story “The Shadow at the Bottom of the World.” This last tale seems especially suited to seasonal reading, for those who want an elegant text to instill horror into Hallowe’en observances.

I would be hard-pressed to select a favorite from this book. There is not a dud among the 33 stories assembled here. [via]