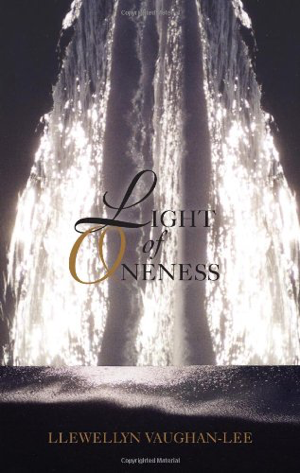 Shaped like a lamp from the Niche of Lights, Tirmidhi’s poem prefaces Llewellyn Vaughn-Lee, Ph.D.’s Light of Oneness and succinctly outlines the overall premise of the work. It also immediately establishes that the author intends to develop his persuasive reasoning by aligning his own views with those of other proven authority. In this way he honors how the true foundation of one’s thought is always based upon the thoughtful recognition of another’s. Light of Oneness is full of rich examples culled from a broad array of world religious and mystical traditions including Shamanism, Judaism, Christianity, Islam and Sufism, Hinduism, Taoism, Confucianism, Zen and Tibetan Buddhism, as well as employing Jung’s take on Alchemy, and psychotherapy. By recognizing and establishing the sovereignty of this silsillah of inspired expiration, one may ideally follow it, along with the author, to the original expression of kun, let it be.

This compositional approach is not new to Llewellyn Vaughn-Lee, it is rather his style, one he has refined at least since the appearance of the essay entitled “Dream-Work Within A Sufi Tradition” in 1991 (Sufism, Islam, and Jungian Psychology, pp 131-146, Scottsdale: New Falcon Publications, J. Marvin Spiegelman, ed.). Since that time, he has written and published numerous books through The Golden Sufi Center in Inverness, California, including, Traveling the Path of Love: Sayings of the Sufi Masters (1995) in which, as editor, Vaughn-Lee gave way to his impulse to quote by compiling a whole volume of potent mystical phraseology.

In Light of Oneness as in his other works, Llewellyn Vaughn-Lee does not simply parrot the sayings of the Masters, instead, he tends to showcase their words like jewels in the bezel of his own emerging state. The danger in doing so lies in how his opinions open or close the meaning of the original. For example, one might ask with justification, is it really valid to quote al-Hallaj’s famous utterance “ana’l-Haqq” under any circumstances? How can we pretend to understand, or even approach the station of the mystic that only God knows? The utterances of mystics are located in space and time differently than a divinely inspired book such as the Qu’ran, whose revelation potentially alights anew on the heart with every reading. But in the case of Llewellyn Vaughn-Lee employing the much too-often quoted words of al-Hallaj, context is everything:

There is no answer, because on the level of Truth there can never be a question. When Buddha held up a flower, when al-Hallaj said ‘ana l-Haqq (I Am the Absolute Truth), it was not in answer to a question. The relationship between the mystical ground of nonbeing and the world of cause and effect is not easy to describe… (Light of Oneness pp158-159).

In Light of Oneness, Llewellyn Vaughn-Lee constantly shifts from a personal, differentiated viewpoint to a global perspective, and to that of the collective consciousness of humanity, to illustrate how Oneness encompasses the mirror of multiplicity. Completing the quote above:

…there is a way these two come together, because even to suggest that they are different would be to remain on the level of duality. (Light of Oneness p 159).

And this Oneness, Llewellyn Vaughn-Lee asserts, is illuminated by how the rich diversity of various phenomena is united by wholeness and unconditional Love.

To over-intellectualize the message of Light of Oneness would do violence to its author’s intent. As a Sufi teacher in the Naqshbandiiyya-Mujadidiyya Sufi Order and the successor of Irina Tweedie, author of the famous journal Daughter of Fire (Nevada City: Blue Dolphin Press, 1986), Llewellyn Vaughn-Lee has attempted in his teaching and writing to interpret difficult key Sufi concepts into what he calls “plain speak.” Indeed, in the chapter entitled “Powers of Darkness” (Light of Oneness pp 93-108) he begins a complex area of discussion with clear and simple models that gradually open into more complicated concepts reinforced by repetition and previous example. He nurtures with milk before feeding the reader meat. This spirit is evident throughout the work, as the author presents what is essentially a simple concept that requires some measure of elaboration buoyed by traditional foundation to reveal its inherent simplicity.

Light of Oneness expresses a timeless message appearing in a timely manner. Llewellyn Vaughn-Lee understands that the journey of arriving is only achieved by allowing all of the voices of Truth to speak to a present –if constantly shifting- condition. Light of Oneness points to the Source encompassing everything at once like so many multi-colored patches sewn upon the heart of our own Mystery. [via]