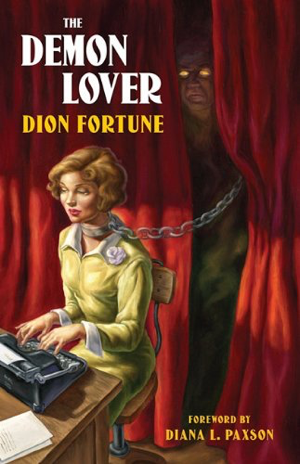 I had previously found cause to compare the fiction of Dion Fortune to that of Charles Williams, and Fortune’s first novel The Demon Lover certainly supports that case. Unlike the occult sensibility of her more lauded book The Sea Priestess, that of The Demon Lover is not neopagan, but rather Christian. Needless to say, it is not a bigoted anti-magical Christianity, but an esoteric perspective that values the Christian tradition, and gives some credit to the possible benefits of a naive piety. Like The Sea Priestess, however, this book amplifies and explains the action of its main characters in terms of their reincarnations through history. Where The Sea Priestess had Atlantean and Celtic pagan backdrops, The Demon Lover offers the Roman Empire and Middle Ages. The story is told by an omniscient third-person narrator, and even more than The Sea Priestess does, it gives the impression of occult instruction illustrated by a tale.

My very worn used softcover has some curious jacket copy describing the state of affairs some 75% of the way through the book as if it were the inception of the plot. A more conventional supernatural thriller might have begun there in fact, gradually disclosing earlier events as they became clear to some less-involved protagonist. But Fortune tells the whole story chronologically, beginning with a conflict internal to an esoteric order in London, and only gradually reaching the country setting where the alarming phenomena occur. The climax of the book is very much engaged with an occultist rationalization of folkloric monsters: both vampires and werewolves.

The characters are composed quite vividly, although they do draw somewhat on stereotypes. There is a short but substantial denouement that completes the redemptive action of the plot, and also addresses its consequences for the secret fraternity and for humanity as a whole. In that passage, Fortune has one of her fictional initiates offer a tacit quote from the ethics lecture of the Neophyte grade in the actual Hermetic Order of the Golden Dawn. Fortune herself had been initiated into its successor orders the Alpha et Omega and the Stella Matutina, but the “Fraternity” of The Demon Lover is clearly no mere mask for any of those, in part because one of its defining characteristics is the exclusion of women, and all three of those hermetic orders from their respective inceptions admitted both men and women. The story is implicitly contemporary, i.e. set in the 1920s, when it was written and first published, but it would probably have made more historical sense if it had been set in the mid-nineteenth century, before the precedent of the Theosophical Society inclined almost all significant occult organizations to afford women equal standing with men.

Although this book is a little clumsier than Fortune’s later fiction, it is still a worthwhile read. [via]