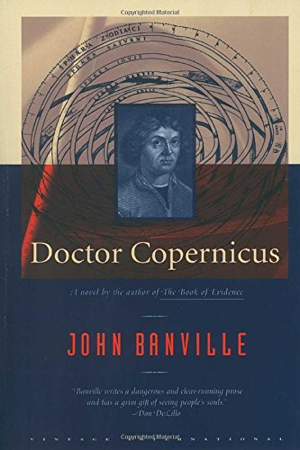 John Banville’s Doctor Copernicus is a fiercely interior historical novel about the Renaissance polymath and astronomer. It is divided into four parts, one about his childhood and youth, a second about his mature career, a third regarding the publication of his masterwork De revolutionibus, and a final section on his death. All but one of these are delivered in a third-person omniscient narration that includes glimpses of Copernicus’ own perspective. The exception is part three, where the narrator is Copernicus’ disciple and editor Rheticus (Georg Joachim von Lauchen). Banville makes Rheticus out to be a rather unsympathetic character, and certainly an unreliable narrator.

The novel does good work in exposing the intellectual and cultural backdrops of Copernicus’ life: a Hermetic Renaissance in Italy, and Catholic Orders menaced by Reformation in Prussia. The achievement of his “system” is presented as ambivalent in his own regard, and he is repeatedly shown in the grips of epistemological despair.

The final section of the book, though brief, is very effective. It does not perpetuate the sanguine legend that Copernicus happily took in the first sight of the published and bound De revolutionibus on his deathbed. It does, however, fold his subjective impressions back onto the images and persons established in the earlier sections of the book, so that there is an awful symmetry to this last reckoning. [via]