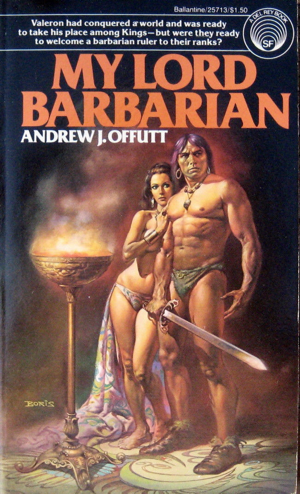 This free-standing sword-and-planet novel is fun enough, although its greatest virtue may have been to provoke its Boris Vallejo cover art. The far future setting has no conscious relationship to ancestral earth, and the interplanetary civilization that forms the setting is just surfacing from a medieval dark age. There is a post-apocalyptic theme of the rediscovery of ancient technologies. The barbarian of the title is a newly-crowned warlord of one of the “Six Worlds,” and the tale concerns imperial intrigue touched off by the prospect of his possible betrothal to the daughter of the Emperor.

Although the setting and action are very much in line with Edgar Rice Burroughs, the running commentary on “barbarism” makes for a more interesting comparison to Robert E. Howard. Both emphasize the heroic virtues of men who succeed in conditions of barbarism. Offutt’s protagonist Valeron is rather embarrassed to be considered a barbarian, which Howard’s Conan never was. (Conan would simply take advantage of the way in which it would cause civilized folks to underestimate him.)

There are some consistent verbal affectations: “it seemed not deep,” “Maybe Darcus could have done defeat on the Sungoli,” etc. But the prose is fast-paced nevertheless, as is the sequence of events. The end of the story is abundantly foreshadowed, but not hopelessly predictable. [via]