Ben Trafford reviews A Wicked Pack of Cards: The Origins of the Occult Tarot by Ronald Decker, Thierry Depaulis, and Michael Dummett, in the Bkwyrm archive. 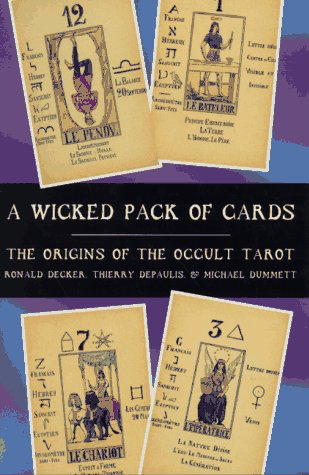 Wow. I’m quite willing to bet that this book has outraged more occultists (of the self-important variety) than Kelly’s Crafting the Art of Magick.

The authors, a bunch of fairly dour and sarcastic scholars, handily debunk the various myths surrounding the occult origins of the tarot. That’s right, once and for all, Cheops did not hand a bunch of stone tablets directly to Cleopatra.

Aside from the acerbic historical dissection of the popular beliefs about the deck, they also provide some wonderful pictures of archaic decks, and let us trace the evolution of the tarot cards to the standardization provided courtesy of A.E. Waite. This book is a gem for anyone who doesn’t need the cards to be handed down from the mystical lords of Atlantis to find them useful.

Two final points on this book: it’s heartening to see that the occult community was as filled with twinkies three hundred years ago as it is today. Also, these guys finally do something I’ve been waiting for someone to do for years: they out-and-out toss that stupid Kabbalistic tree of life bunk right out the window.