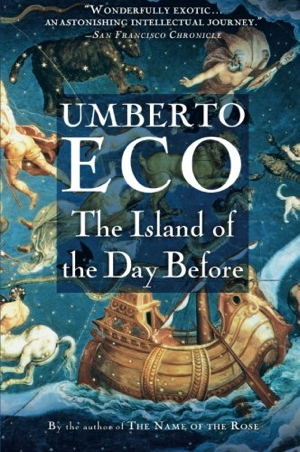 “I challenge anyone to find himself abandoned on a deserted ship, between sea and sky in a vast space, and not be ready to dream that in his great misfortune he at least has had the good fortune to stumble into the heart of time” (273).

The Island of the Day Before is a fantasy about fantasy, with a documentary conceit and no genuinely supernatural elements. Some details of the seventeenth-century science may now seem rather occult, but the essential metaphysics of the entire tale are very much of our world. It is a tale about a quest for the secret of determining longitude, and it seeks to celebrate the mystery of the antipodes in the paradoxes of an international date line.

Although this story was set a century earlier, I found it rather reminiscent of Thomas Pynchon’s Mason & Dixon. Both are big beefy novels written in the waning of the 20th century, and concerned with the exploratory push of European powers (in early modernity and the Enlightenment, respectively), as well as the relationships between objective and subjective worlds. But their titles show the biggest difference between the books. Mason & Dixon has two protagonists, and the surfeit of plot (to be expected from Pynchon) concerns their relationships to each other and their world. The insular Eco novel is instead nearly solipsistic in the extent to which characters other than the protagonist Roberto are practically reduced to figments of his imagination–the plot, such as it is, is largely in his reminiscences, dreams, and eventually, composed fictions.

The book is a long one, with many short chapters, and the slow pace of the plotting makes it easy to pick up and to put down. It took me more than a month to read it through. My two favorite chapters in the book could each stand on their own, and with particular reference to my occult interests. Chapter 26, “Delights for the Ingenious: A Collection of Emblems” is a long meditation on the symbolism of doves. Chapter 37, “Paradoxical Exercises Regarding the Thinking of Stones,” is a contemplative demonstration of getting stoned in line with the discussion “On the Final Will” in Liber Aleph vel CXI.

The metafictional elements are pronounced in this novel, where the principal character himself ends up writing a “romance,” in which his imagined half-brother and rival becomes his alter-ego. Eco makes both the opening and the closing of the book rather disorienting and unconventional, as part of his reflection on the composition of imaginative literature, and he uses the premise of working from a discovered three-hundred-year-old manuscript both to assert and to undermine the credibility of his story. [via]