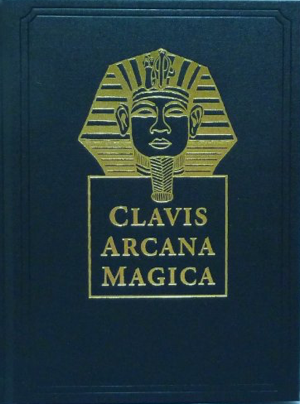 Frederick Hockley is getting more and more attention these days, and rightly so. I was fortunate to have written the introduction of one of Hockley’s manuscripts, The Offices of Spirits, which (if you will indulge me the shameless self-promotion) is also available from Teitan Press, the publisher of the work at hand, Hockley’s Clavis Arcana Magica.

Alan Thorogood’s introduction to the previously unpublished manuscript is well-written and concise, giving a history of Hockley’s magical practice and background – what little of it is known – that sets the stage for the context of the work. Often regarded as a prolific if not exceptional crystallomancer (one who calls spirits into crystal balls or mirrors), Hockley was, like John Dee before him, perfectly miserable at the practice. He thus employed a scryer, in this case Emma Louisa Leigh, for his workings. Sadly, she would die in 1858 at the age of twenty, but appears to have been the seeress for these sessions.

While no internal reference is available, Thorogood dates the manuscript to approximately 1856. It has a wonderfully Egyptian-themed gilt cover and spine with a transcription of the manuscript along with a facsimile in Hockley’s as-always brilliantly careful and legible hand. The manuscript covers everything from obtaining a suitable crystal or mirror for scrying to operations and discussions on necromancy in the true sense, a capacity to speak with the dead that was at the heart of the contemporary Spiritualism movement.

The contents themselves remind me quite strongly of Dee’s work, a magical practice still based in tradition but which has clearly taken a personal turn from the more well-worn path of the Renaissance influences that formed the corpus of Hermetic literature. In fact, if you had laid the names SOL, TARUOM, MANBET, ADA and ELTESMO before me, I would have suggested they were from Dee’s Enochian and not Hockley’s work at all! The end of the work even includes a name in “Angelic Language”, something also strongly connected with Dee’s philosophical corpus.

There are a number of magic seals and circles containing various names given unto him by his Crowned Angel, a name and function that conjures up (pun intended) echoes of the “Holy Guardian Angel” of modern occultism. Similar to Dee as well, most or all of these are difficult to decipher or deconstruct beyond taking them at face value. This should not be understood as a detraction from the work, but a parallel to similar practices that have been widely adopted. To me, it shows that he had at this point begun to formulate his own personal magical system: the hallmark of both the adept and the delusional. In this case, given Hockley’s expertise and depth of knowledge in the field, I obviously side with the former.

This excellent and intriguing work is available as a limited edition of 650 hardbound copies from Teitan Press. [via]