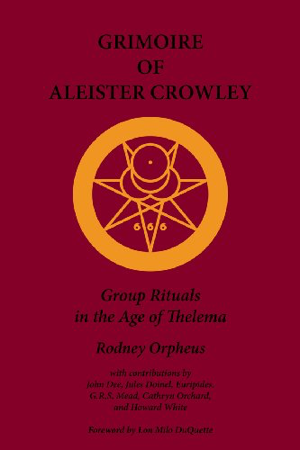 It’s not that I didn’t expect Grimoire of Aleister Crowley: Group Rituals in the Age of Thelema by Rodney Orpheus to be great, which it is, I’ve just never considered myself a “group ritual” sort of guy. Okay, there are certain rituals that are greatly enhanced by the presence of another person, like the tango, but aside from those… and a few others…. Alright, I guess it made me admit to myself just how much group work I participate in despite my self-proclaimed (and self-perceived) mindset. My name is Colin, and I… I find benefit in social interaction. There, I said it. Eleven steps to go.

Let’s start with the introduction by Lon Milo DuQuette. In a word: excellent. I am continually astonished and amazed at the depth and insight that he provides, and the clarity that he brings to the complexities of Thelema and the “spiritual journey” (for lack of a better term) in general. He addresses the conundrum of magick, whose object is a change in the individual, being seemingly at odds with the idea of ceremonial group work. This is an important prelude to the work, and he handles the topic admirably.

Within the work itself, each ritual is given a historical introduction. Every one is well written and provides a fantastic background to the ritual itself. It notes the time at which Crowley constructed the ritual, the backstory, and on a practical note also cites the expected duration, layout, number of participants, equipment and other mundanities that make for a smooth performance. There is also an introductory section on general safety that should serve more than profitable for someone not well-seasoned in this sort of work. No one wants to be known as “[N] the One-Eyed Magician”.

As I cannot possibly touch on each and every one of the fifteen rituals included (plus some more in the appendix), and a short sentence itself would be an equal disservice, I will take them in total and say that each is well thought out, practical, and provides ample instruction for the novice to the journeyman and beyond. Any organized body of magicians (an oxymoron, I know) would benefit from this on a bookshelf, and I highly encourage it specifically for building up a magical current in such a group. My favorites include the “two fragments of ritual” that evolved into “A Ritual to Invoke HICE” and “The Supreme Ritual”, the “Mithraic Liturgy”, “An Evocation of Bartzabel the Spirit of Mars”, and “The Bacchanal”.

To risk both cliche and hyperbole at once, the Grimoire of Aleister Crowley is an instant classic. It is a fantastic work, combining practical advice, experience and historical perspective to deliver a truly exceptional modern grimoire.

All opinions expressed herein are my own and do not necessarily reflect the opinions of any organizations that I might be affiliated with, employed by, &c. [via]