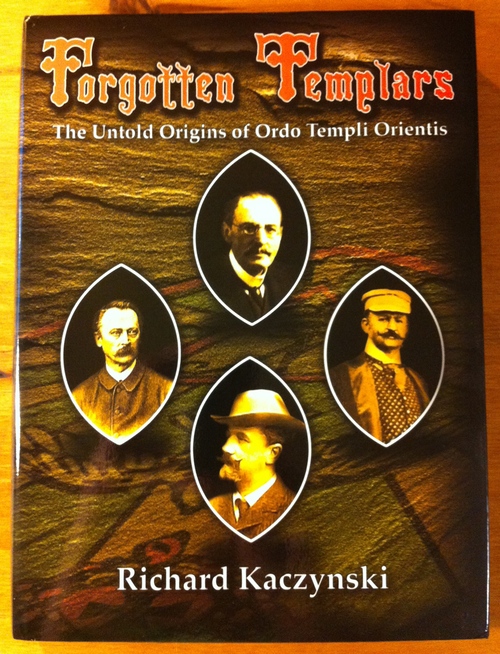 Every so often, I am reminded what a crap writer and researcher I am. Those times often, and justifiably, coincide with Richard Kaczynski publishing something. Did he really have to put out a second edition of Perdurabo just to rub it in, though?

Just released is a new title, Forgotten Templars: The Untold Origins of Ordo Templi Orientis. For the most part, people equate O.T.O. with the most famous of its members, and second Grand Master, Aleister Crowley, but beyond that knowledge of the founders drops off precipitously. In fact, Crowley was not even a founding member, though it is argued that he really did “get the ball – pun intended – rolling” as it were. Those more familiar with the history might be able to come up with Theodore Reuss, but fewer still would be capable of listing out names like Klein, Hartmann, Kellner, or Krumm-Heller.

Like Perdurabo, this book has a lot of information, is meticulously researched, and contains a great number of pictures from both modern day and the relevant time period to help set the visual setting for the underlying events.

As the book began as a research project on Henry Klein, it begins with this man’s own journey through his life in the music business and eventually into esoteric Masonry in the heyday of rite-swapping that invariably connects with the likes of John Yarker (given no short mention in the book). Reuss, Hartmann, and Kellner are subsequently covered in greater detail than I have seen elsewhere at any time, and I found it especially helpful to have the additional context of their personal lives apart from their strictly Masonic work.

From the detail of the individual personages comes an exceptional exposition of the nascent origins of OTO and its basis in the various extant (worked or otherwise) rites circulating at the time. This, for me, was the most fascinating part, as you can see the groundwork laid toward the gradual development and emergence of OTO pre-Crowley, whereas most literature has focused on post-Crowley. In fact, only in the final chapter is Crowley’s association and subsequent contributions (not inconsiderable, given that he re-wrote the initiation rituals) covered: and they are that much better for having the detailed background leading up to his involvement.

Forgotten Templars is exceptionally well researched, well organized, and equally well written, and without a doubt should adorn the shelf of anyone with an interest in the historical context of the OTO. Kaczynski has done an amazing job. Again. [via]