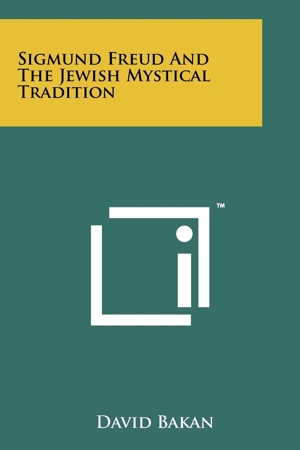 I found this book absolutely thrilling. It’s long been my opinion that the psychoanalytic tradition is closer kin to religions than it is to the natural sciences, or even the social sciences. In Freud’s Future of an Illusion he militates against religion as a “neurosis” of the social body, but his objection is to the credulity of religionists and the counter-factuality of religious doctrines, while his effort there is to explain their persistence. At the same time, he identifies religious functions that psychoanalysis is—by his lights—better equipped to address, thus making religion obsolete.

In Sigmund Freud and the Jewish Mystical Tradition, David Bakan very ably demonstrates the religious sources of the evidently novel concepts and techniques of Freudian psychoanalysis. He supplies some biographical context, showing the genuine enigma of psychoanalytic origins, as well as Freud’s access to kabbalistic ideas. Bakan quite suitably draws on Leo Strauss’s theory of esoteric text from Persecution and the Art of Writing to address Freud’s apparent textual subterfuges in his antisemitic cultural context. (And he could have gone a step further in showing how Strauss himself was instructed by that context, as well as drawing on Jewish intellectual traditions.) An overview of the Jewish mystical milieu here includes a historical and doctrinal survey. In particular, Bakan points out the major events of Sabbatian and Frankist apostasy, suggesting that Freud underwent a similar development towards a humanistic secularism.

In the original central text Bakan leaves open the question of whether the kabbalistic influence in Freud’s formulation of psychoanalysis was conscious or unconscious. But in the 1965 “Preface to the New Edition,” he is able to cite his later communication with Chaim Bloch, a student of kabbalah and acquaintance of Freud, who attested to German scholarship on the subject among Freud’s bookshelves along with a French translation of the Zohar.

Moving into the meat of the book, Bakan organizes his study around two complementary symbolic figures—Moses and the Devil—and Freud’s treatments of and relationship to each of them. In the final section on similarities between kabbalah and psychoanalysis, the foci are hermeneutics and sexuality. Each large section is divided into short, accessible chapters, and I really did find them a pleasure to read.

This book has confirmed me in my suspicion that modern occult magicians probably read too much Jung and not enough Freud. [via]