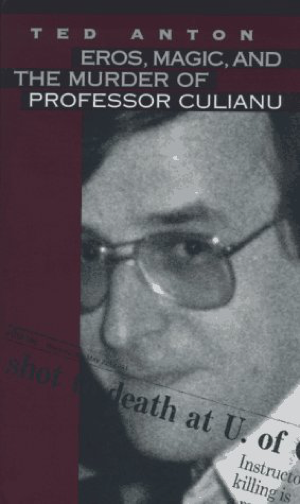 The greater portion of Ted Anton’s Eros, Magic and the Murder of Professor Culianu is a biography of the slain historian of religions, a Romanian national defector who was ascending to an accomplished position at the University of Chicago in the footsteps of his countryman Mircea Eliade. Anton’s long-form journalistic approach braids the biographical narrative intriguingly with accounts of Culianu’s own scholarship and writing of fantastic fiction. I think I’ve read a little over half of the academic works that are available in English under Culianu’s byline, and this book does a decent job of glossing their theses and contents. Additionally, it has interested me in the volumes that he issued under Eliade’s name after the older scholar’s death, pointing out the extent to which Culianu used these as vehicles for his own bolder ideas.

The title Eros, Magic … evokes Culianu’s own seminal study Eros and Magic in the Renaissance, but the Murder of Professor Culianu is necessarily the event towards which the entire book is oriented. Culianu’s daylight assassination at the University of Chicago Divinity School is still officially unsolved. Anton gives plenty of reasons for readers to suspect the involvement of the Romanian Intelligence Service (RSI), but efforts of the Chicago police and FBI to identify the murderer(s) were dilatory, ineffective, and possibly even compromised.

The book reads very quickly, with short chapters and engaging prose. There was an odd clinker, where Anton quoted Culianu’s secretary bewailing his murder with “Not Mr. Culianu!” (17) And similarly, Anton has Culianu himself drolly remark, “Mr. Eliade had some pretty daring ideas after he died” (228). Having had a little firsthand experience of the University of Chicago, an institution that lionizes its faculty while sorely indenturing graduate students and treating undergraduates with grudging tolerance, I find it nearly impossible to imagine the title Mister rather than Doctor being applied to either of these men by their colleagues or staff.

The event of Culianu’s murder begins the book, and returns at the end of the biography proper. Then the narrative proceeds to the funeral events and the murder investigation. All along, there are parallel accounts of developments in Romanian politics (a story that was new to me in many details). Culianu’s engagement with current events in his native country waxed and waned, and he never returned in person. But his relationship to Eliade–perhaps the most lauded Romanian scholar of the century–made him an object of Romanian attention, which he sometimes leveraged through philippics published in Romania and abroad.

Perhaps the most surprising bit of the book was the appearance, after Culianu’s death, of a suburban Chicago couple who claimed to be receiving spiritualist communications about the murder by somniloquy. This peculiar episode seems to have come from nowhere and led to nothing, but it cannot be dismissed as irrelevant, especially considering Culianu’s personal and professional interests in the paranormal. But even eerier was Culianu’s own longstanding fascination with the Borges story “Death and the Compass,” and the ways in which he seemed to have divined his own murder.

Anton undertook this book while working at DePaul University in Chicago. It really pulls together an impressive amount of research. It had been on my shelf waiting for me for several years, and I’m glad I finally got around to reading it. [via]