Hermetic Library Fellow T Polyphilus reviews The Fabric of Reality: The Science of Parallel Universes—and Its Implications by David Deutsch. 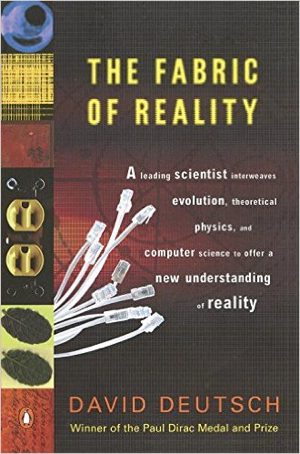 David Deutsch’s Fabric of Reality is woven from what he refers to as “four strands”: the multiverse interpretation of quantum physics (credited to Hugh Everett), evolutionary biology grounded in genetic selection (Richard Dawkins), the postulate of a universal computer (Alan Turing), and scientific epistemology composed of problems and explanations (Karl Popper). Near the end of the book, physicist Deutsch admits that when first observing similarities and connections among these four, he had taken the latter three to be emergent from, if not reducible to, quantum physics. Ultimately, though, he presents them as equally fundamental and mutually illuminating. According to Deutsch, all four of these theories have arrived at the practical domination of their respective fields, vanquishing competing theories, but all four have failed to be integrated into a widespread worldview. It’s his contention that they need each other to fill the explanatory gaps that make them each seem “‘naive,’ ‘narrow,’ ‘cold,’ and so on” (346).

The book is divided into fourteen chapters, each of which ends with a glossary, a thumbnail summary of the chapter’s argument, and a tease for the following chapter. This signposting structure would make it easy to cherry-pick chapters of interest to a particular reader. On the other hand, the thesis of the whole book relies on the interdependence of the concepts treated in different chapters. So–other than the philosophy of mathematics in Chapter 10, which the author himself says can be merely skimmed by those without strong prior orientation to that field–it’s probably worth reading from cover to cover for full appreciation. I enjoyed doing so, at any rate. Although the concepts may sometimes be on the forbidding side, the prose is lucid. I especially liked the philosophical dialogue in Chapter 7.

This text is now twenty years old, and most of its component ideas were at least that old when it was written. Deutsch insists that his is a “conservative” approach to elaborating the worldview that is a consequence of “taking seriously” the four theoretical perspectives of the book. Considering that, by his lights, the explanations that they afford are the best for their respective fields of inquiry, he says that the worldview that he has assembled from them is the one that needs to be challenged by new ideas in the future. Despite all of the advances in communications technology in the 21st century, though, this contemporary philosophical worldview has yet to be accessed even by many readers who will find it interesting and perhaps compelling. [via]