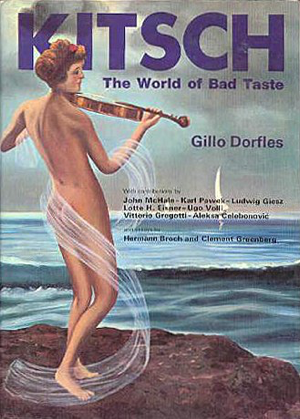 Kitsch: The World of Bad Taste is an anthology of scholarly essays overseen, introduced, and summarized by Gillo Dorfles in the 1960s. It is profusely illustrated, albeit mostly in black and white. The contributions are of varying quality, and Dorfles himself does not shine among them. The book has aged strangely. It is clear that mid-20th century intellectuals felt a much greater anxiety about kitsch than is evident anywhere today, despite the fact that kitsch has been in no way contained or controlled. One of the more effective contributors, Aleksa Celebonovic, writes, “Kitsch has found it easy to impose itself on the uneducated and the ingenuous who have not yet chosen their cultural requirements and have only made superficial attempts to find out about the possibility of satisfying them, and who have still less acquired fixed tastes; kitsch thus infiltrates into the mind like an infection in an organism that is incapable of resisting it” (282-3).

I got this book used for a song, and it’s been sitting on my shelf gathering dust for years. The boggling gaucherie of Trump pseudo-royalty impelled me to finally read it, especially as it promised a chapter explicitly about kitsch in politics. And indeed, the 1939 Clement Greenberg piece collected here had some interesting things to say–of its own historical moment–about “The Avant-Garde and Kitsch” relative to authoritarian states. There is also a gratifyingly caustic essay on “Christian kitsch” by Catholic intellectual Karl Pawek.

It seems clear that the resistance and opposition to kitsch must have some ideological basis, but few of the contributors manage to be explicit about their own ideological grounding. One exception is Greenberg, who observes the impulse of “Capitalism in decline” to block and destroy any advances in culture, concluding, “Today we no longer look toward socialism for a new culture … Today we look to socialism simply for the preservation of whatever living culture we have right now” (126). Another is Ugo Volli, who concludes his essay on “Pornography and Pornokitsch” by calling for kitsch to be “definitely wiped out by a profound revolution, a socialist one, at its roots” (250). With that quote in view, it is a little odd to read the jacket copy with clips of praise from Newsweek and The New York Times. This, although Dorfles and company approach kitsch as a socio-aesthetic problem. [via]