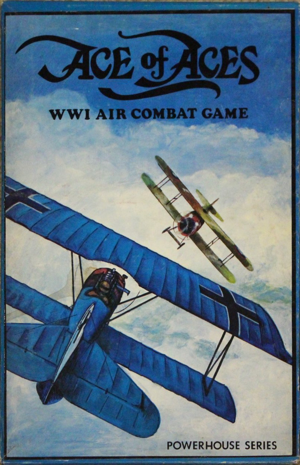 I lucked into this two-book slipcased set at a friends of the public library used book sale. Although the case was worn and maybe water-damaged, the books themselves were in fine shape. Unfortunately, my copy is missing the 8-page rule booklet with tables necessary for playing the intermediate and advanced games. But the basic game alone is a blast.

This brilliantly-designed game allows two players to engage in a WWI aerial dogfight, pitting the pilot of a SPAD XIII against that of a Fokker DVII. Each player has his own book, and both begin on a page with a drawing that represents the pilot’s view of the scene. Each chooses a maneuver, and a simple indexing operation then leads to the next page for each player, where a new view is provided, and where there may be opportunities for damaging gunfire. I’ve played this one several times with my daughter, and we always had fun. A play of the basic game takes from 15 to 30 minutes.

The intermediate and advanced games introduce rules for ammunition and fuel, and for variations in altitude. This set is part of a series of games using the same conceptual engine. I’d snag another without hesitation in similar circumstances. [via]