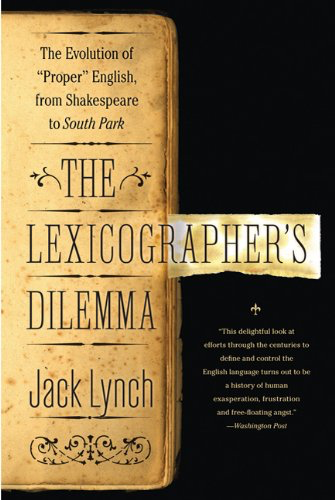 The dilemma of the title is the conflict between the lexicographer’s duty to describe language as it is actually used, and the public’s demand for rules and direction in English usage. Lynch exposes the frustrated will-to-power of prescriptivist grammarians, pundits, mavens, and language reformers of all periods–along with the egalitarian naivete of descriptivist lexicographers.

The approach is historical, with a preamble regarding the origins of human language and the beginnings of English, and then an evenly-paced coverage from the 17th century into the 21st, most often through biographical lenses. There is attention to both British and American English, as well as reflection on the further global spread of the language. The final chapter discusses the current stresses, mutations, and creativity resulting from technological change and globalization, while a penultimate chapter delves into linguistic obscenity as a special topic.