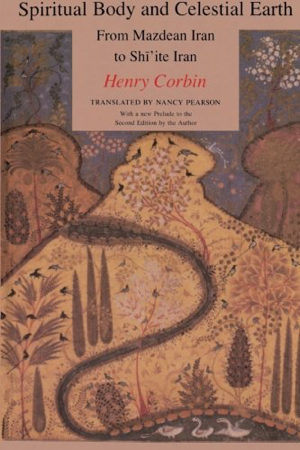 Although written in part as a continuation of Corbin’s Creative Imagination in the Sufism of Ibn ‘Arabi, this volume stands on its own, and is perhaps of even more general interest. In it, the author proposes an esoteric continuity in Iranian religion from Zoroastrian antiquity to the present, and for his demonstration he focuses on comparing the “Mazdean Imago Terrae” to the “Mystical Earth of Hurqalya.” These are respectively Zoroastrian and Muslim approaches to the Celestial Earth of the title, while the Spiritual Body is represented through the systems of pneumatology which Corbin classes as a “fundamental theme” of Shi’ite gnosis (77), also prefigured in Mazdean doctrines. Following Corbin’s essays, the larger part of the book is filled with eleven selected translations from Shi’ite mystics, presented chronologically from Suhrawardi in the 12th century to Shaikh Ahmad Ahsa’i in the 19th.

Corbin is a very demanding writer, and although this book is rewarding, it is no easy read. Not only is he an expert in a culture strange to most Anglophone readers (and he is unconcerned to shield us from technical specifics), he is unmistakably a mystic himself, given to delighting in the paradoxical expressions that demonstrate how the object of his interest transcends rational analysis. At the end of his essay on “Hurqalya, Earth of Resurrection,” in his effort to communicate to the reader that “boundary where the boundary ceases to be a boundary and becomes a passage,” he refers the reader to two pieces of music! (105) Sufficiently engrossed by this book and its messages, I dutifully tracked down recordings of Richard Strauss’ “Death and Transfiguration” and the closing chorale of Mahler’s Resurrection Symphony, but making those references so central to his exposition really robbed it of its communicative power in the moment of reading.

Even so, the content of this book–both the essays and the translations–is so valuable to those with genuine mystical aspirations, that I recommend it heartily. It is especially apposite for Thelemites pursuing the “Life” of Liber CL. [via]