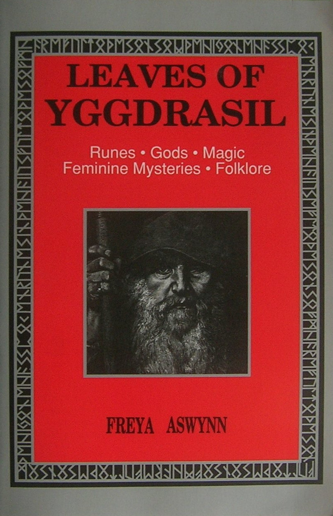 The author knows runes and Germanic pagan folklore very well–AND she writes about it in plain English. She dispels the popular myth that Norse paganism is totally violent and male-centered; she also gives technical advice on how rune divination and spellworking should be done. In these respects, few other books come close. Despite its good points, there were a few flaws from a strictly Asatru viewpoint. Aswynn is an ex-Wiccan with some ceremonial background, and it occasionally shows in her writing: First, she connects the rune Berkano with a “triple goddess” divided into Maiden, Mother and Crone aspects. (Modern magicians do agree that Berkano is a feminine rune, but the rest is not consistent with Asatru teachings.) Second, she lists gender-polarity and elemental correspondences for each rune–when those things play only a minor role in Germanic belief. Third, she tries to fit the runes onto an eight-spoked year wheel, although there is no historical evidence that any rune-using culture followed that calendar exactly. If a reader is willing to ignore the Wiccan- influenced parts, though, Leaves is definitely worth a look.