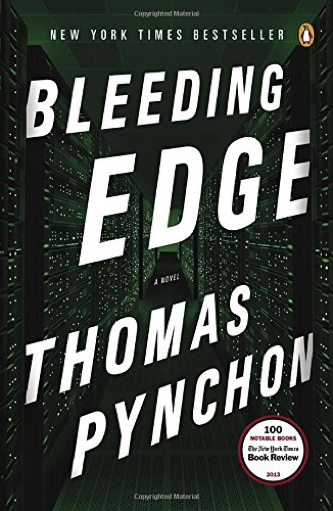 Bleeding Edge presents the dotcom-bust scene of “Silicon Alley” in NYC in 2001, with fine-tuned conspiracy psychedelia. Like the author’s other novels, it has evil forces of empire conspiring against the common good. Our plucky sleuth in this case is working mom and entrepreneur Maxine, a de-certified fraud examiner.

Despite Pynchon’s policy of personal obscurity, this book seems to project some of his personal affections and anxieties. As a denizen of New York, Pynchon offers what must be his own nostalgia in recurring moments. And his presentation of a pernicious Internet expressing its DARPA genealogy was written at a time when he finally relented and allowed his earlier novels to be distributed in e-book format.

This is not one of Pynchon’s highly digressive sprawls, like Gravity’s Rainbow or Mason & Dixon; it definitely fits in and extends a series with Inherent Vice and Vineland, bringing that sense of subdued and elegiac outrage (with solid, but never-quite-sufficient comic relief) across the line into the twenty-first century. This one captures the peculiar manner in which our deeply-webbed, netted society has become more … well, more like a Pynchon novel. [via]