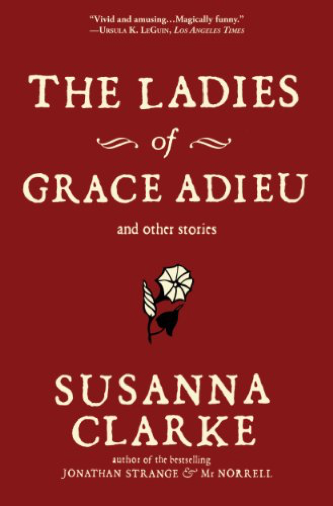 Clarke’s debut novel Jonathan Strange & Mr Norrell made such a positive impression on me that I can’t really imagine away that context when reading this collection of short stories which share its fantasy worldview. They are individually lovely, though, and they bode well for the rumored prospect of a sequel novel of some sort. My favorites were perhaps “Mr Simonelli or the Fairy Widower,” composed in the form of a journal, and the hyperfolkloric and rather Cabellian “John Uskglass and the Cumbrian Charcoal Burner.” There is an academic conceit in the fictional introduction by “Professor James Sutherland, Director of Sidhe Studies, University of Aberdeen,” but the longish “Tom Brightwind” is the only one of the eight stories to take up the footnoted form that gave some readers such alarm in Strange & Norrell.

In “The Duke of Wellington Misplaces His Horse,” Clarke sets a tale in the village of Wall, originally created by Neil Gaiman for his short novel Stardust. (Clarke is evidently friends with Gaiman, and Stardust illustrator Charles Vess contributes drawings to The Ladies and Others–much more beneficially than Portia Rosenberg did in Strange & Norrell.) Gaiman’s story was in turn conspicuously dependent on Lord Dunsany’s King of Elfland’s Daughter. In contemplating this filiation, it occurred to me that much of what makes Clarke’s fairy fantasies distinctive is their inclusion of realistic historical context with social minutiae, which is exactly what Dunsany expunged from his in order to achieve the sort of quasi-mythical exoticism that was his hallmark.