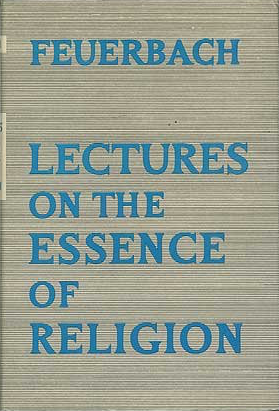 How did I manage to go so long without reading Feuerbach? Why is he not better known among those of us who aver in the 21st century that There is no god but man? Regardless, I doubt I could have picked a better starting-point than the volume Lectures on the Essence of Religion, a text from 1851 in which he offers thirty lectures to explicate and enlarge on his earlier work The Essence of Religion (not to be confused with his best-known volume The Essence of Christianity). This book represents his mature thought in a somewhat conversational style.

Feuerbach discusses the true objects of “nature religion” (typified by classical paganism) and “spiritual religion” (typified by Christianity), and concludes that in both cases they are the human ideal, this-worldly and otherworldly respectively. In the twenty-fifth lecture, he provides an excellent argument against sui generis religion. He even declares (in 1851!): “The ultimate secret of religion is the relationship between the conscious and unconscious, the voluntary and involuntary in one and the same individual.” (310-11)

On the whole, I found him incisive, witty, and fundamentally true to reality as I have encountered it. There were a couple of points on which I would differ with him. I don’t share his conviction that humanity as a whole will inevitably progress to a more rational condition. Also, although a few passages indicate that he knows better, he all too often uses “imagination” as a blank synonym for “delusion,” thus permitting the effects of false imagination and idle fantasy to eclipse the importance of the imaginative faculty in nurturing and realizing practical goals.

“In religion man does not satisfy other beings; he satisfies his own nature.” (76) Deus est homo, brother Ludwig! [via]