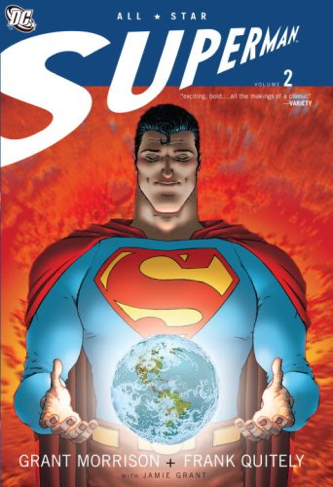 The two volumes of All-Star Superman collect a 12-issue series of comics that are the best Superman stories I’ve ever read. These honor the canon of Superman lore, while redeeming its corniest features, and facing down its perennial difficulties. Unsurprisingly, Morrison emphasizes certain elements to elevate half-baked science-fictional aspects of the character into mythic tropes, most significantly the yellow solar energy (radiant golden sun of Tiphareth) associated with Superman’s power, and the various super-others of Krypton and Bizzarro-world. Quitely’s art is clean and spacious, never busy, and really suits the mood of the narrative.

Much of the story arc, which includes the “Twelve Labors of Superman,” concerns his foreknowledge of his impending death. As a result of that anticipation, he builds a simulacrum “Earth Q” to explore the consequences of an Earth without Superman. I adore the metafictional/metaphysical conceit that our world is actually Earth Q! And here on Earth Q, Superman is just a story, but a story that is obviously important to Morrison and many of his readers. [via]