Hermetic Library Fellow T Polyphilus reviews City of Revelation: On the Proportion and Symbolic Numbers of the Cosmic Temple by John Michell. 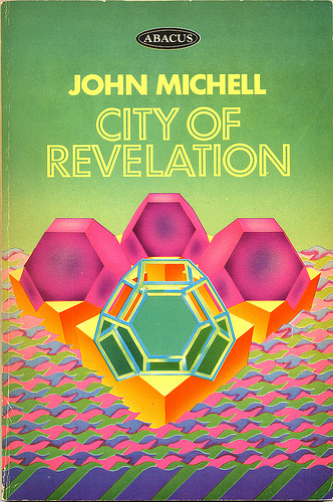 Fortean Platonist John Michell focuses here on a topic that some call “sacred geometry.” He maintains that a single canon of measure and proportion underlies all ancient monumental architecture, unifying it with cosmology, music, and sacred literature. As instances, he discusses the New Jerusalem of the Apocalypse, Stonehenge, Glastonbury, and the Great Pyramid.

Michell does not cite The Canon of William Stirling (1897), which was undoubtedly an enormous influence on the composition of City of Revelation. (The 1974 & 1981 R.I.L.K.O. editions of The Canon feature forewords by Michell.) He is also somewhat cagey about other occultist influences. Not daring to mention Aleister Crowley’s A∴A∴ by name, he refers to “a famous magical order.” (67)

Michell became identified with the New Age movement which eagerly consumed his writings. But City of Revelation, while acknowledging a millennial moment, does not share the sanguine utopianism common to the New Age. In some ways, his nostalgic tone is a better fit for the anti-occultist esotericism of the Traditionalists. He is a little muddled about the history of early Christianity, confusing the (late 2nd-century C.E.) date of the first heresiological agendas–i.e. the development of a Christian orthodoxy–with the (much later) date of the identification of the institutional church with Roman imperial power. (13, 128) So, unlike the Traditionalists, and more like the Theosophists (whom he cites familiarly as sources), he sees the principal degeneration of Christianity as taking place with the suppression of antique Gnosticism, rather than the Reformation.

Ultimately, his arithmological focus is on the numbers 666 and 1080, which he identifies with masculine/solar and feminine/lunar qualities respectively. He speculates very briefly on the “extraterrestrial” origin of the canon, and thus of human civilization. The book is full of admirable examples of Greek gematria, and some of the astronomical analogies and meteorological data are very striking. The volume could benefit from an index of references to specific numbers discussed in the text. [via]