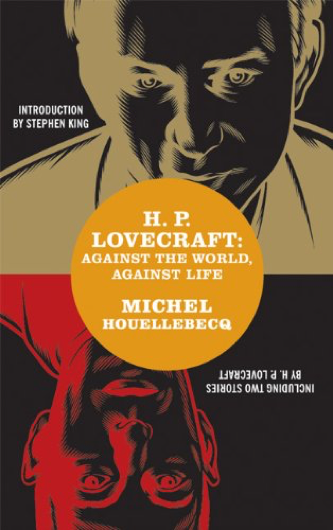 This treatment of the life and work of Grandpa Cthulhu was Michel Houellebecq’s first book, and in his preface he characterizes it retrospectively as his “first novel” (23). His summary of H.P. Lovecraft’s literary program can be assembled from the chapter headings in Part Two: “Attack the story like a radiant suicide; utter the great NO to life without weakness; then you will see a magnificent cathedral, and your senses, vectors of unutterable derangement, will map out an integral delirium that will be lost in the unnameable architecture of time.”

The emphases in this book are ultimately on Lovecraft’s anti-modernism and his racism as expressions of fundamental fear and hatred of life itself, and the fear and hatred as the preconditions for Lovecraft’s genuine artistic success. Houellebecq is not writing about success among critics or academics, which was even in 1988 only beginning to glimmer with respect to Lovecraft’s work, and HPL never saw anything like personal financial success or fame in his lifetime. The success at issue is among readers and writers of fiction, where Lovecraft’s “great texts,” the archetypal novellas of yog-sothothery of his final decade, loom as “ritual literature.”

Houellebecq clearly shares HPL’s pessimism, misanthropy, and hostility to realism. Those who in any way doubt Lovecraft’s enduring racism or its integral role in his fiction should read this assessment from a sympathetic writer. I think Houellebecq also makes a persuasive case as to how the person of “the old gentleman” fitted itself for cultic veneration. While the recent remodeling of the World Fantasy Award trophy (formerly a bust of HPL) was ideologically sound and pragmatic, Lovecraft’s own opposition to soundness and pragmatism was what made him a fantasist of the highest and most influential order.

In addition to Houellebecq’s entertaining and insightful essay, the book contains two of Lovecraft’s “great texts”: “The Call of Cthulhu” and “The Whisperer in Darkness.” These are well chosen as essential nuclei of the “founding mythology” offered by the dreamer of Providence. The English edition of the book also sports “Lovecraft’s Pillow,” an introduction by Stephen King, whose personal debt to Lovecraft goes almost unremarked, while he defends escapist literature as such and praises Houellebecq’s handling of HPL. I recommend all parts of the book. [via]