Hermetic Library Fellow T Polyphilus reviews Low Magick: It’s All In Your Head … You Just Have No Idea How Big Your Head Is by Lon Milo DuQuette. 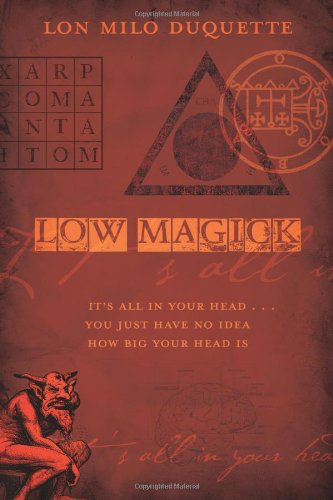 The world is full (and fuller all the time) of grimoires, technical manuals on one or another school of esoteric technique, and primers on beginning magical practice. To the credit of author Lon DuQuette, Low Magick is none of these. It is instead a brief collection of mini-memoires, true stories of occult practice that demonstrate the contexts and motives for magical operation, as well as their means and effects. As such, it is something of a sequel to his earlier book My Life with the Spirits, although it presumes no familiarity with the previous volume.

The “Low” in the title is not to distance the work detailed in this book from the ceremonial style of magick, of which it is a signal, if slightly unorthodox, demonstration. It is rather “Low” in order a) to embrace an indictment once leveled against him by his mentor (15), and b) to place his practical engagement in counterpoint to the theoretical “High Magic” of Alphonse Louis Constant, one of his spiritual ancestors (9, 16-17). The magick in this book is the sort that gets its (suitably consecrated) hands dirty, and doesn’t worry too much about what the neighbors think.

Consistent with his other recent books in the field, DuQuette here delivers both entertainment and sound instruction. This may be one of his best. [via]