Hermetic Library Fellow T Polyphilus review Supergods: What Masked Vigilantes, Miraculous Mutants, and a Sun God from Smallville Can Teach Us About Being Human by Grant Morrison. 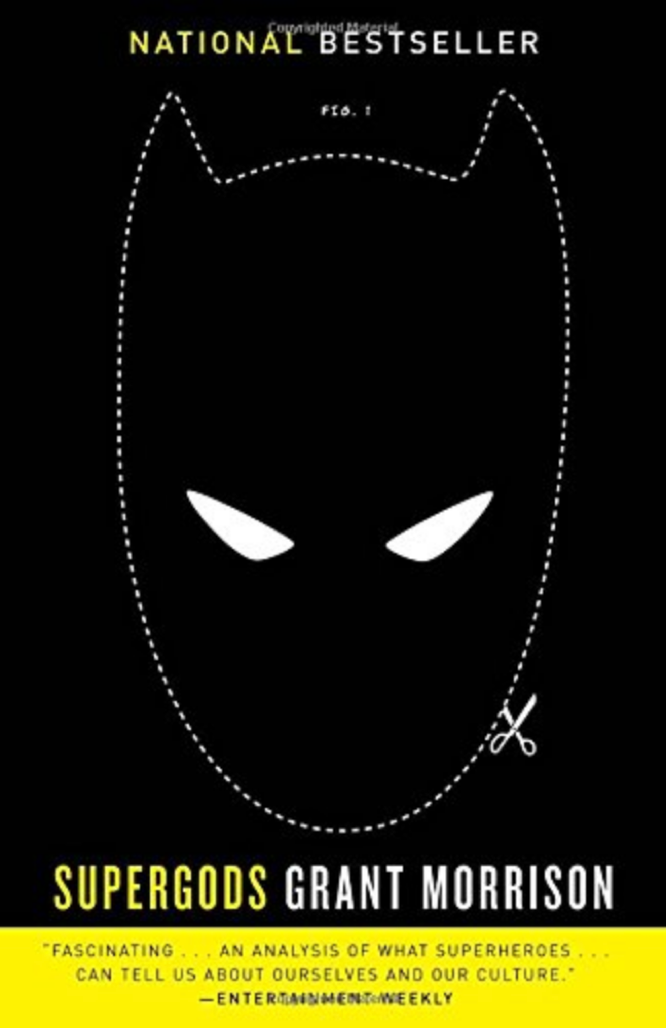 I’m a fan of Grant Morrison’s comics writing and I picked up Supergods when it was first published six years ago, but it took me a while to get around to reading it. Although he did fulfill his ambition here to write “a personal overview of the superhero concept from 1938 to the present day” (419), it is mixed with a personal memoir of his own comics career in increasingly liberal doses as the book advances. This feature, which some might find objectionable, is I think fairly inevitable given the reflexive and metafictional approach involved in Morrison’s creative work. His notion of the “fiction suit,” by which a writer can enter a fictional world exposed in those writings, is not only instrumental to many of his comics, but also to his novel perspectives on the superhero phenomenon.

Morrison’s verge-of-the-2012-apocalypse thesis is that we can all undergo apotheosis into the “supergods” of the title, if we are possessed of the sufficiently optimistic narratives he aims to supply. At the same time, he does observe the brutally frank counterpoint: “A growing population of ‘kidults’ could be sold on boys’ toys and the new, improved on-screen adventures of Batman, Spider-Man, the Hulk, and Green Lantern, helped along by books like this one–which would suggest some hidden value in the smeary power fantasies of the disenfranchised” (312). Other passages in the book reveal that his ability to see himself as a villain is part of what contributes to his distinctive comics vision.

The book does treat the emergence and maturation of superheroes across various media: print comics, radio, television, and film. It omits their entry into more literary, non-illustrated fiction, such as Michael Chabon’s The Amazing Adventures of Kavalier & Clay. In fairness, such expressions have been pretty marginal to the development of the collective, mass-mediated superhero concept.

The cover of the book showcases Frank Quitely’s art from All-Star Superman, which is in many ways the destination of Morrison’s story. Throughout the book, there are a smattering of covers and pages reproduced (in black and white, alas) from DC comics. Morrison does give comparable discussion to the rival house Marvel, albeit unsupported by illustrations. An engaged reader of Supergods will benefit from occasional ‘net searches to view the significant designs that are discussed, especially in the first half of the book.

Morrison is a practical occultist, and the second half of Supergods is full of his confessions regarding his engagement with ritual, drugs, and hermetic symbolism. I realize that he may have been trying to glamorize himself a little here, and that these elements may exoticize him for some readers. But as someone with similar (though perhaps less sumptuous) experiences, I found that these credible accounts humanized him significantly, contrasting with his magisterial “overview” voice. When he drops into the memoir format, though, he has a tendency to jump around associatively in a way that repeats or scrambles chronological items. On the whole, the writing is witty and entertaining, and I enjoyed my engagement with this rather hefty book. [via]