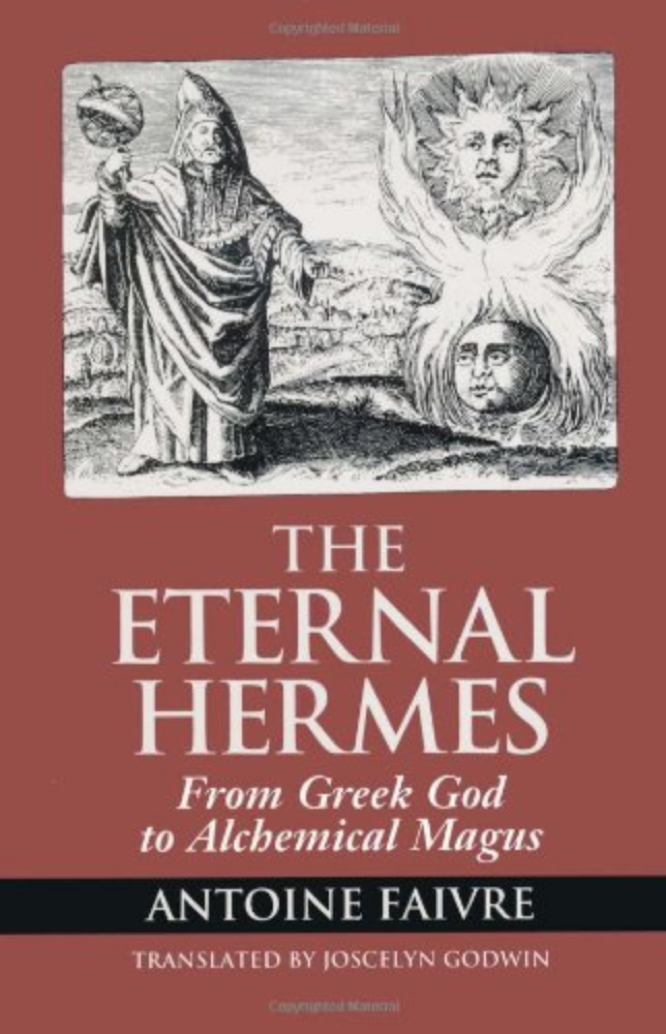 Although this is a collection of translations of essays that were originally published separately, there is a unity of theme among them that indicates a hidden harmony. The pieces (five essays and a bibliographic survey) that make up this book might almost have been written as part of a coherent project: to demonstrate the persistence of the presence of Hermes, both overt and covert, in Western culture even through the present.

The first fourth of the book is an extended essay, “Hermes in the Western Imagination”, tracing the appearance of the image of Hermes in art, literature and {32} thought, from classical times through the twentieth century. It covers the ground gracefully and thoroughly, including even items like Geofroy Tory’s Champ Fleury (an English translation of which is kept in print by Dover for the delectation of calligraphers and book designers).

The second, briefer essay, “The Children of Hermes and the Science of Man”, discusses the living meaning of the figure of Hermes and its implications for the possibility of human sciences with not only a human face but a human heart. Faivre makes it clear that he is not advocating any manipulative “re-enchantment” of the world — not “the creation of false myths but the refusal of them … not sacrificing to ancient or new idols but refusing to idolize history, that is to say, refusing to succumb to the ideologies and pseudophilosophies of history. If Hermeticism today has a role to play, it is that of demystifying, so as to remythify.”

The third, “From Hermes-Mercury to Hermes Trismegistus: the Confluence of Myth and the Mythical”, surveys the records of vitalizing visions and encounters with the manifestations of Hermes, as sage, as god, as alchemist, as magician, as revealer of the mysteries and secrets of nature (himself revealed by the higher being of the quester), and finally to his manifestations in late (i.e., recent) esotericism.

With the fourth, “Hermes’ Presence in the City”, comes a change of pace. Faivre takes a brief look at manifestations of the Hermes figure as specifically urban (Hermes was known as founder of the magical city Adocentyn) in twentieth century stories dealing the image of the city — the proprietor (named Chidher [=Khidr] Green) of a joke shop in Gustav Meyrink’s The Green Face, the marginal vagabond child in Buñuel’s film Los Olvivados, and certain trickster figures in Beyond Thunderdome. Hermes still plays the psychopomp amid the labyrinthine ruins of popular culture.

In the fifth, “The Faces of Hermes (Iconographic Documents)” Faivre traces images of Hermes through a series of plates, from the fourteenth century to the present; the essay provides commentary for the nearly forty pages of plates, which range from the familiar relics of high culture and the recondite glyphs of esoteric ritualists to the products of popular occultism. One of the most striking, in the light of the frequent quotations from visionary and initiatory narratives dating back over a thousand years, is a plate of a Masonic rite in which Hermes rises from his grave to instruct the candidate.

Although each chapter has it own references, the final section of the book, “The Inheritance of Alexandrian Hermetism: Historical and Bibliographical Landmarks”, provides an additional survey in the form of a list, with remarks and annotations as needed, of books and essays that show the reception of the Hermetic tradition throughout European history. This closes with a useful section on {33} the modern scholarship of Hermeticism.

The book provides an excellent introduction to Hermetic themes and to the significant literature about them. Faivre generally refrains, however, from doing much more than presenting the material. His interpretations are reserved for the figure or presence of Hermes, and he seldom addresses the particular contexts within which it appears. Even some very obvious patterns (like the confluence between the motif of Hermes as entombed teacher in early visionary texts, and the later appearance in initiatory rites of a figure (Hermes or otherwise) teaching from an emblematic tomb) remain unremarked — or, perhaps, left as an exercise for the reader.

Joscelyn Godwin’s graceful translation is eminently readable, and skillfully avoids some of the occasional infelicities that have marred other translations of Faivre’s work.

The book would be useful to anyone with an interest in the history of Hermetic traditions, and especially useful to any library serving an institution with an interest in cultural history. For those just coming into contact with the traditions of Hermeticism, it provides not only access to the literature, but also, and most important, access to the meaning the traditions have had, and continue to have — and without which all the documents and studies are mere arrangements of dry bones.