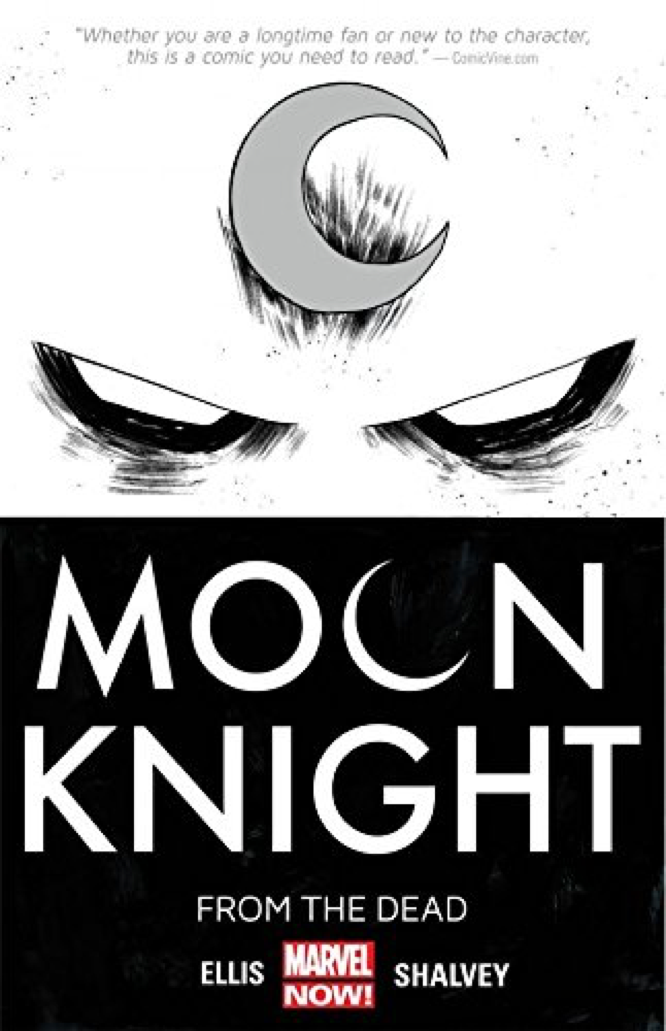 I hadn’t read any Warren Ellis comics for a while when I heard about the collections of his work on the Marvel superhero title Moon Knight. From the Dead reprints the first six issues of the new series, which is a continuation rather than a reboot of earlier treatments of the character. I haven’t read much of those erstwhile books, and not for a long while, so I didn’t make comparisons while reading, and didn’t benefit from any coy allusions to earlier storylines.

“Mr. Knight” is declared to have been insane, and it’s an open question as to how much sanity he has recovered. His operation in these stories is very “Batman”: nocturnal urban vigilante with high-tech accessories. The thing that’s most un-Batman is his attire. Where Batman favors dark togs, Moon Knight wears all white in any of his several costumes (old-fashioned cape and cowl, three-piece-suit and full-head mask, or avian pseudo-mummy). This attire is suitably surprising, and when his foes ask, “Who the hell are you?” he answers, “The one you see coming.”

As usual, Ellis’s pacing and efficient use of dialogue are exquisite. Declan Shalvey’s drawings are a good match for the content, in both gritty scenes of violence and episodes of eerie communion with the moon-god Khonsu. The book favors wide, short panels extending across the page and marching down it, giving a recurrent feeling of sinking or falling.

My favorite of the issues collected here is the fourth, “Sleep.” It puts Moon Knight in his role of “watcher of overnight travelers” to investigate mishaps at a sleep clinic. The psychedelic fugue of the inquiry is shown in day-glo page compositions that contrast shockingly with the rest of the book, and reminded me of some of the most far-out sequences in The Invisibles or 1970s Doctor Strange.

It was worth my while to borrow this one from the public library. [via]