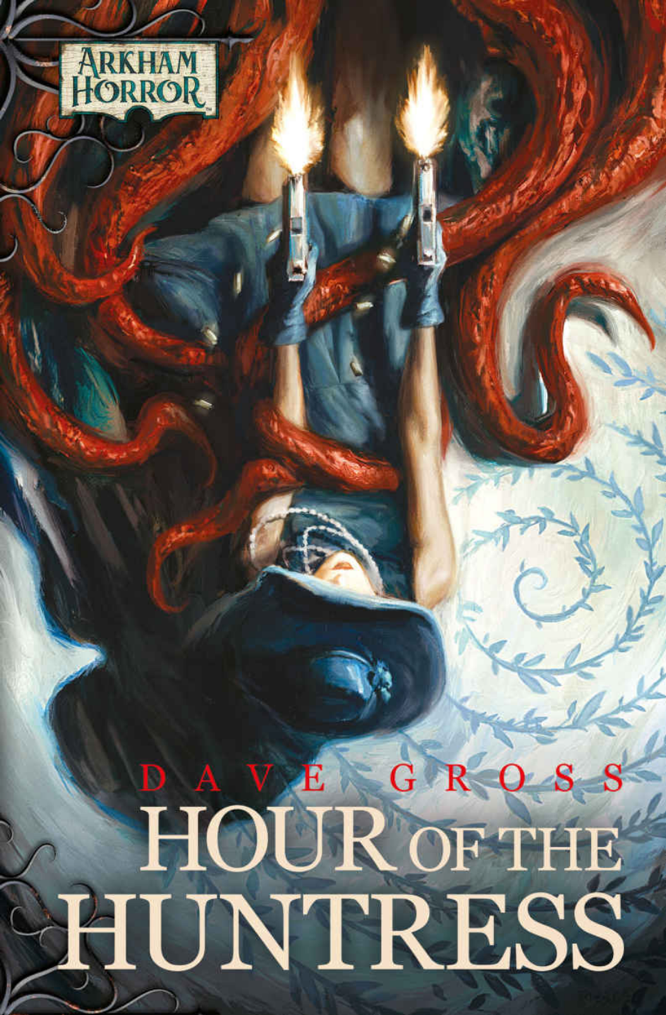 Hour of the Huntress is the first of a series of novellas published by Fantasy Flight Games to provide background and context for the “investigator” protagonists of the “Arkham Files” games, which are rooted in the horror-adventure milieu originally developed in the Call of Cthulhu role-playing game and the Arkham Horror cooperative board game. (Later games include Call of Cthulhu: The Card Game, Elder Sign, Eldritch Horror, and Arkham Horror: The Card Game.) Although set in Lovecraft’s imaginary Massachusetts college town of Arkham and related locales, and drawing heavily on pulp-era yog-sothothery, these games also incorporate other horror literature and have some enduring elements of their own invention.

This substantial novella in ten chapters details the introduction of investigator Jenny Barnes to Arkham. Jenny is a young sophisticate who has been living as an ex-pat in Paris, and has returned to the US in search of her younger sister Izzy (Isabelle) after a worrying interruption in their correspondence. The story includes Jenny’s acquisition of her trademark twin .45 pistols as she picks up the traces of what appears to be a murderous secret cult. The tale is fast-paced and interesting, and more importantly for players of the games, the characters are well-drawn.

After the text of the novella, the book includes eleven pages “reproducing” relevant news clippings, brochures, lecture notes, letters, police reports, memos, scholarly articles, and so forth, all in fragmentary form. All attractively presented with considerable verisimilitude, these texts are somewhat variable in the plausibility of their content. The translated page from the Necronomicon is notably disappointing with its repeated grammatical errors, especially as its central prose conceits are rather good.

The book came with a tiny suite of cards to provide some additional options for the Jenny Barnes character to players of Arkham Horror: The Card Game. In terms of game efficiency, these seem slightly inferior to the ones that were originally issued in the Dunwich Legacy expansion. Still, they do add some variety. I’ve heard completist game collectors say that they felt obliged somehow to buy the book just in order to get these cards, and I’ll say they’re not worth the price of the book. However, if you are a player of one of these games and like the Jenny Barnes investigator already, I would recommend the book as a fun read in itself that should enhance your affection for the game character. Readers uninterested in the games may still get some real pleasure out of the story, if they are willing to allow a bit of heroism to intrude on the cosmic despair of pristine yog-sothothery. [via]