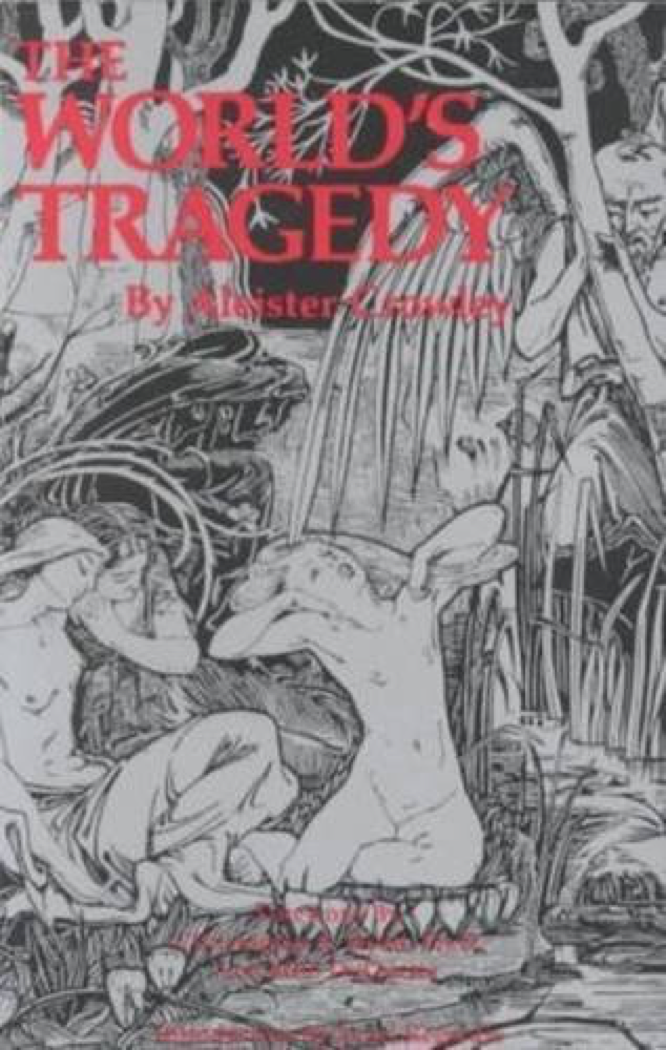 Why did Aleister Crowley hate Christianity so much? You would too, if you were “Alec.” The long autobiographical preface to The World’s Tragedy makes his personal motivation abundantly clear. The main text of the book is a play in verse, re-writing the entire Gospel myth to subordinate it to the worldview of Crowley’s “Pagan rapture,” and soundly trashing all of the fondest and most revered of Christian imaginings.

A prologue in “The Garden of Eros” translates the Christian Trinity into a not-even-demiurgic threesome of schemers in an antelapsarian Arcadia. The first act is “The Red Star,” in which an act of child sacrifice (what else?) inaugurates the drama, and the spiritual life of humanity turns toward the darkness of Christianity. In “The White Wind,” the annunciation is supplanted with a depiction of the rape of the Virgin Mary by a Roman centurion (an allegation advanced in antiquity by both critics and believers of Christianity). “The Blue Dwarf” is the act that presents the nativity of Jesus, who comes forth as a bottle-bound genie, under the sage appraisals of the magi. The fourth act is “The Black Bean,” showing unpleasant domestic relations among Jesus and two “beloved disciples” (John and Magda). The final section crucifies Jesus in the “thick darkness of the Emptiness of Things,” and heralds the act as the beginning of the end of classical virtue, descending into “The Grey Night” of Christianity.

The second printing of the New Falcon Press edition includes two additional pieces of font matter. An introduction by Israel Regardie describes his own personal relationship to the text, as well as vouching for its literary quality and keen sense of humor. The foreword by Hyatt and DuQuette places the 1991 republication of the book in the context of aggressive political reaction on the part of fundamentalist Christians in the USA. The two also mention that the play had at that time never been staged.

I have talked with Thelemites from time to time who think it would be rewarding to publicly stage this often hilarious and unquestionably blasphemous work. In truth, it would not be worth the bother to amass the necessary resources for a full and polished production. The play is almost entirely destructive and anti-Christian: its final message of messianism for a new Aeon is too cryptic to communicate effectively to profane audiences. On the other hand, individual acts can make excellent reader’s theater for consumption among the cognoscenti. They can even be timed to the liturgical calendar: I have enjoyed seeing “The Blue Dwarf” put on as the Worst Xmas Pageant Ever. [via]