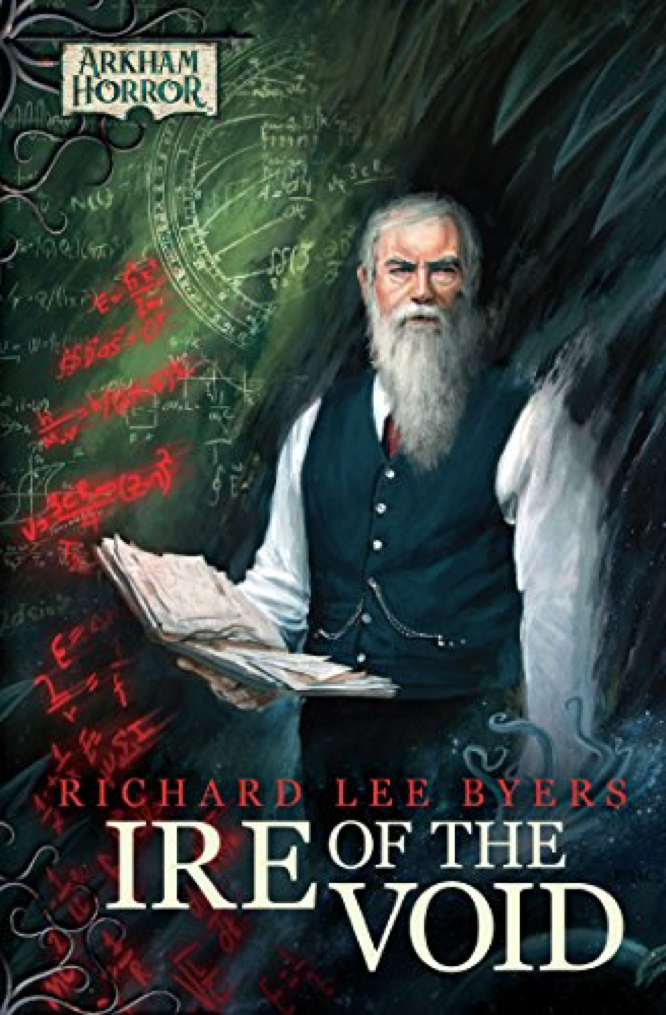 The Ire of the Void novella supplies a narrative background for the Arkham Horror Files game character Norman Withers, an eccentric astronomer. The slim hardbound book is a good read over three or four sittings. As is generally the case for Fantasy Flight Games’ Arkham fiction, the horror-based stories tend toward more heroic plot lines, somewhat at odds with the cosmic pessimism of their yog-sothothery source material. In this case particularly, I was a little put off by the relatively happy ending.

The chief background literature for Ire of the Void is Frank Belknap Long’s “The Hounds of Tindalos” (1929) and its progeny. Author Richard Lee Byers goes a little way toward establishing the enigmatic “Tindalos” as the country of the Hounds’ origin, although he leaves a trace of ambivalence about that identification. (I fancy the idea that “Tindalos” was the name of the original human victim by whom knowledge of the Hounds entered arcane lore.)

In keeping with the format established in the Hour of the Huntress book about Jenny Barnes, this one has about a dozen glossy pages of appendix, consisting of images of documents relevant to the story, such as clippings and letters. The longest and most interesting of these is the journal of Jonathon Tane which among other things implies an identity between Carcosa and “Eibon’s Atlantis.” The tiny excerpt from an English translation of The Pnakotic Manuscripts is awful, showing (again) that the writers and editors of these books treat obsolete English verb endings as ornamental, deploying them without regard to person or number.

I dismissed the promotional Arkham Horror – The Card Game cards included in the previous volume of this series as adding little to the value of the book. In contrast, Norman Withers is an investigator character for whom cards have not otherwise been published, and he is an exciting and distinctive addition to the game. His deck parameters have him evolving from the Seeker class into the Mystic one, and his draw pile keeps its top card exposed. I haven’t yet played with a Norman deck, but I’m very much looking forward to it. [via]