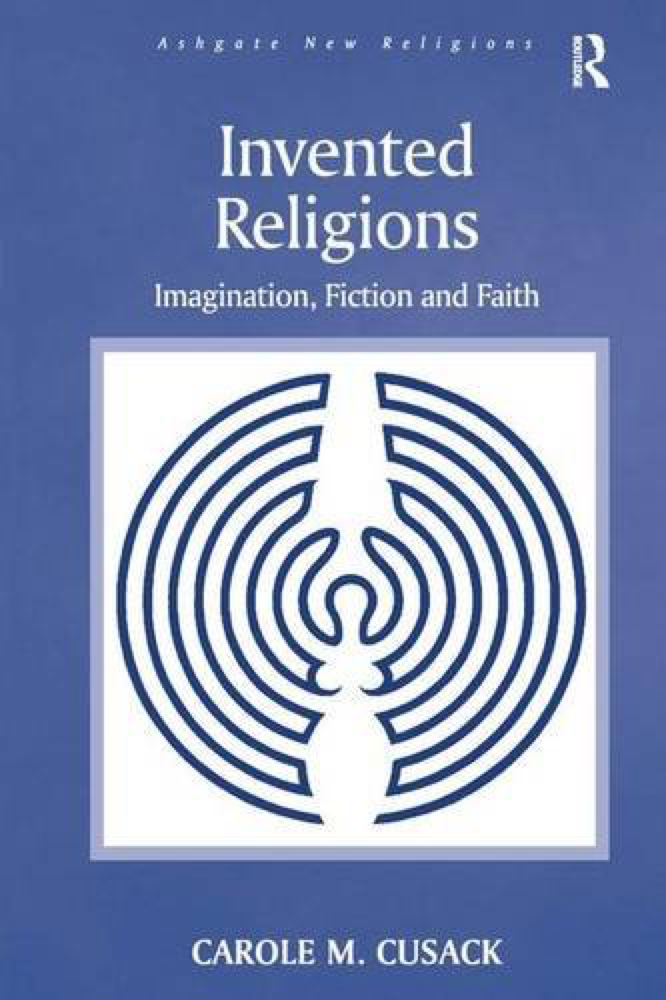 Carole Cusack’s Invented Religions is a scholarly survey of several key examples of the phenomenon that I once labeled “meta-religions”–where the sense of meta– is “beyond” or “after.” Such cultural configurations use religious tropes and advance religious claims, but they violate conventional (Christianity-based) religious definitions by rejecting solemnity, theological coherence, singularization of religious identity, and/or pre-modern historical narratives of validation. Cusack wants to grant the unqualified status of “religion” to such transgressors of religious norms, rather than treating them as pseudo-religions or “parody religions” as had been done in those rare cases where academics had previously deigned to notice them at all.

Her cardinal case studies are the Discordian Society, the Church of All Worlds, and the Church of the SubGenius. I have sympathy and somewhat more than anecdotal experience with all three of these, and I think that Cusack’s treatments of them are quite sound on the whole. She recounts their actual origins and development, itemizes their principal doctrines, and characterizes their practices. In brief, Discordia is the cult of Eris, goddess of Chaos; the Church of All Worlds is a neopagan sodality inspired by Robert Heinlein’s Stranger in a Strange Land; and the SubGenii are seekers of Slack and heralds of the OverMan.

In addition to these three exemplars (begun respectively in the decades of the 1950s, 1960s, and 1970s), Cusack supplies a further chapter on “Third-Millennium Invented Religions” that treats Jediism, Matrixism, and the Church of the Flying Spaghetti Monster. These are all less than twenty years old, and their long-term social resilience and cultural fecundity is relatively untested. Moreover, they have largely germinated through the instrumentality of the Internet, and critics often doubt whether the dilute social fabric of ‘net-mediated associations can support durable religious development. Finally, all three express a far lower tension with the larger “host” culture than the Discordians, SubGenii, or CAW do. Jediism and Matrixism are rooted in corporate-owned mass-media cinema properties, and thus mired in a consumer-fan identity. Jediism as census-protest and the Church of the FSM both oppose themselves to establishment religion, but neither offers any resistance to the ethos of rational secular liberalism.

In a remark at the outset of her concluding chapter, Cusack proposes that earlier examples of “invented religions” might include the Victorian Theosophical Society, if we are to suppose that the Mahatmas or their teachings were a product of Madame Blavatsky’s imagination (141). But why pick on Theosophists? Surely such skepticism could as easily be trained on Joseph Smith and the angel Moroni for the Latter Day Saints, on Muhammad and Gabriel for Islam, or on Paul and Jesus Christ for Christianity. A far better example of occultist meta-religion from the end of the long nineteenth century can be found in Aleister Crowley’s “Liber LXI vel Causae A∴A∴” point 7:

“Some years ago a number of cipher MSS. were discovered and deciphered by certain students. They attracted much attention, as they purported to derive from the Rosicrucians. You will readily understand that the genuineness of the claim matters no whit, such literature being judged by itself, not by its reputed sources.”

This “proof of the pudding” attitude dovetails perfectly with Cusack’s repeated observation that invented-religionists are “more likely to ask ‘does it work?’ than ‘is it true?'” (9-10) The empirical prioritization of result ties into her theoretical framework regarding modernity and secularization. Invented religions are deliberately in-credible, typically advancing their outrageousness in contrast to traditional “faiths” that expect belief as a fundamental condition–an insistence largely originating in Protestantism, as Cusack notes (46). Instead of qualifying adherents through belief, invented religions, like most religions known to scholars, qualify them through practices and experiences.

Cusack’s theoretical considerations use invented religions to demonstrate the imagination as a religious faculty, and she does go some way towards connecting this faculty to the religious function of narrative and (by implication, at least) to the essentially fictive nature of most specifically religious “beliefs.” Despite her application of a Situationist idea of “counter-spectacle” to the Church of the SubGenius (84ff.), she does not go as far as she might have in terms of connecting the religious imagination with visionary experience.

In any case, Invented Religions does not claim to be an exhaustive study, but simply an inaugural one. It comes very close, in fact, to being exactly one of the books I imagined writing when I aspired to the ivory tower of religious studies academia. It should form a valuable point of departure for further studies of these important cultural phenomena. [via]