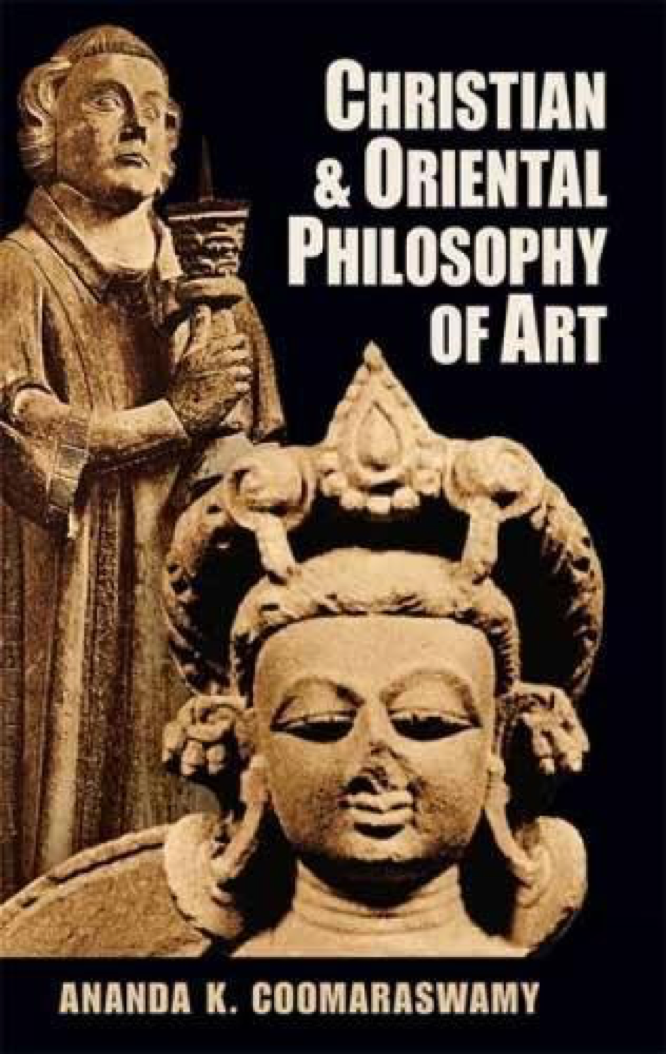 The slender Christian & Oriental Philosophy of Art (originally issued as Why Exhibit Works of Art?) consists of four lectures and five brief papers, representing what is probably the cream of the polemical writings of Ananda K. Coomaraswamy. The author was one of the original proponents of the Traditionalist school of comparative religion, and he spent the later decades of his career as curator of the Indian collection at the Boston Museum of Fine Arts. The writings collected here do not so much exercise the discipline of art history, which barely existed as such in the Anglophone world at that time, as much as they propound a theory of material culture, and advocate an idealist philosophy.

Coomaraswamy uses the word “aesthetic” as a pejorative, insisting on the intellectual value of artwork, and he champions the dignity of what museums call “decorative” arts, over and against the “fine” arts which try to segregate expression from utility. He is as likely, or more, to cite Augustine, Thomas Aquinas, and Bonaventure as he is to refer to the Upanishads or other Indian texts, but he claims that these equally reflect a “Unanimous Tradition.” For Coomaraswamy, the name of the ideological enemy is the humanist, whom he characterizes as “a sentimentalist, materialist, or cynic.” (63) His perspective on the history of European culture–in favor of antiquity and the middle ages, and contemptuous of the renaissance and modernity–is in keeping with that of Guénon and other Traditionalists, and the essay on “Folklore” (originally written for a Traditionalist journal) presumes the rectitude of the Indian Chatur Varna so beloved of European Traditionalists who discourse on political themes. (136-7)

Students of the work of Aleister Crowley may be familiar with Coomaraswamy as a figure cuckolded–willingly, to all appearances–by the Beast with Coomaraswamy’s second wife Alice (a.k.a. Ratan Devi). In fact, Crowley’s ostensible review of Coomaraswamy’s book The Dance of Shiva in the 1919 Equinox journal consists of nothing but a rehearsal of their personal interactions, framed by an unfriendly biography of Coomaraswamy. Ironically, the later writings of Coomaraswamy collected in Christian & Oriental Philosophy of Art often emphasize certain elements that are sympathetic to Crowley’s doctrines.

In particular, the first talk “Why Exhibit Works of Art?” includes a long argument for individual vocation that is an excellent fit with the Thelemic notion of True Will. “[W]hen each man makes one kind of thing, doing only that kind of work for which he is fitted by his own nature and for which he is therefore destined…a man at work is doing what he likes best, and the pleasure that he takes in his work perfects the operation.” (15) And in the second lecture, which lends its title to the whole volume, there is a discussion of what Crowley calls the Holy Guardian Angel: “No man, considered as So-and-so, can be a genius: but all men have a genius, to be served or disobeyed at their own peril.” (38)

In his paper on “Beauty and Truth,” Coomaraswamy draws on medieval theory of rhetoric to support his more general ideas about art, and the author is indeed no mean rhetorician. “Industry without art is brutality.” (92) These essays at the very least make provocative reading for anyone interested in the course of what he calls the “museum militant.” (22)