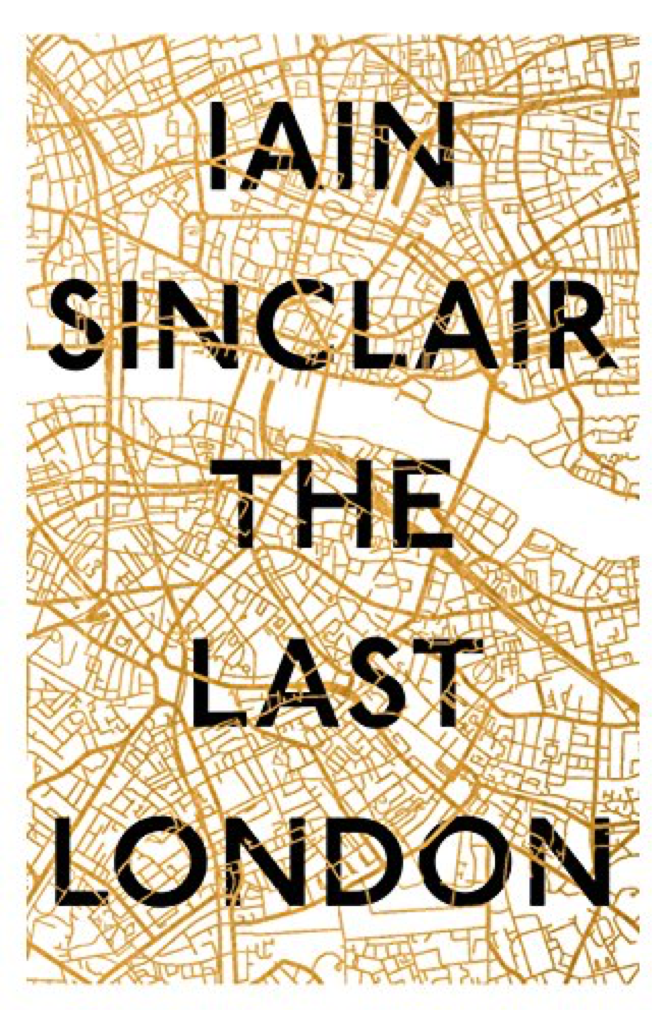 I know I once read, and I suppose it may still be true, that London is the most surveilled city in the world, based on the number of CCTV cameras per person. An awareness of this reality is one of many that hovers in the margins of Iain Sinclair’s Last London, but the lines of the pages are Sinclair’s own indefatigable observation, overhearing, trailing, tailing, and cultural auditing, as he orbits through Olympicopolis, “Shardenfreude,” and a variety of other psychogeographical states and locales. The text combines his own stream-of-consciousness flâneur experiences with kledomancy, graffiti transcription and exegesis, literary anecdote and gossip, and historical research.

In the 1925 story “He,” H.P. Lovecraft wrote of New York City “the unwhisperable secret of secrets—the fact that this city of stone and stridor is not a sentient perpetuation of Old New York as London is of Old London and Paris of Old Paris, but that it is in fact quite dead, its sprawling body imperfectly embalmed and infested with queer animate things which have nothing to do with it as it was in life.” In the twenty-first century New York’s unlife has since spread to cities throughout the United States, and through the neoliberal metastases of capital it now spans the world, infecting even the London and Paris that Lovecraft used to supply a contrasting sense of durable urban vitality. (Not that HPL himself ever visited either city.) Arriving at this conclusion independently, Sinclair seeks in this book to preserve his observations of the “last London” as it succumbs to the virus.

The press of gentrification, speculative property redevelopment, and globalized real estate investment all contribute to the sense of expiration here. It’s the sterility and expropriation that are so fatal, not the decay and mutation. The book’s not sad, though. “I love it,” Sinclair writes of the “panoramic edgeland vista” he encounters in his effort to walk to Barking, under the spectre of the US Presidential election of Donald Trump (241). The final chapter is festive in a manner that might take less artistic people 20 to 40 micrograms to achieve. Also notable throughout is Sinclair’s network of fellow creatives, who accompany him and serve as rests, termini, and haunters of his walks.

Many allusions to contemporary literature, politics, business, and so on are made at a rapid pace with little assistance to the reader’s comprehension. I guess that’s what search engines are for, when it seems important. The book is longish for its style, but Sinclair’s elliptical rants and musings all add up to a worthwhile read. He’s an author I’ve been curious about for many years, and I’m glad to have finally gotten around to reading this very current work.