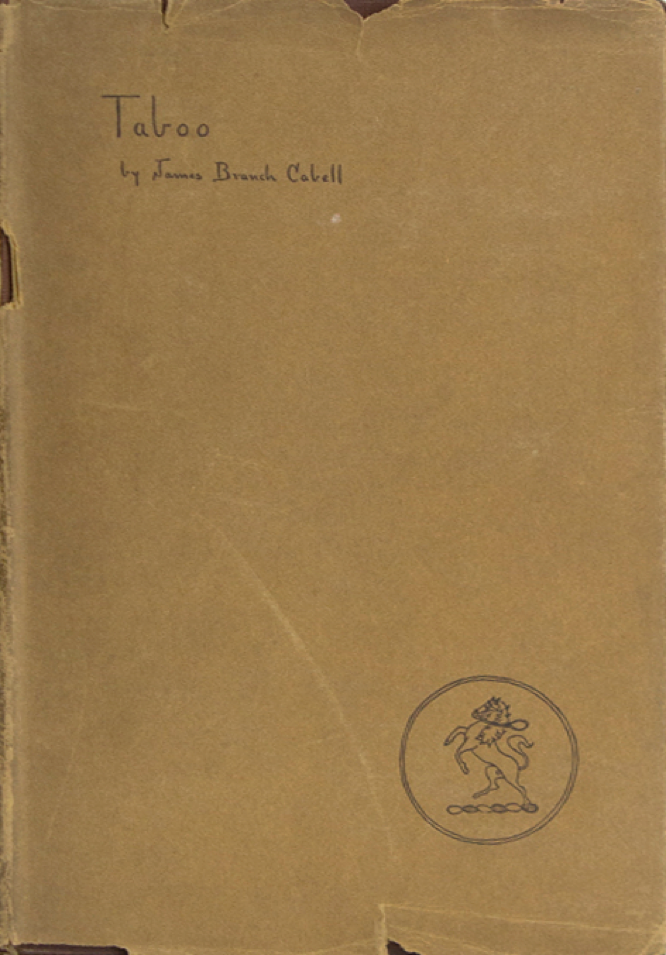 Cabell’s novel Jurgen was the subject of an obscenity case brought in 1919 by Anthony Comstock’s New York Society for the Suppression of Vice, then headed by John H. Sumner. After two years of highly-publicized trial, the court found in favor of the defendants, Cabell and his publisher Robert M. McBride and Company. In 1921, McBride published a short work by Cabell in hardcover. This book Taboo: A Legend Retold from the Dirghic of Saevius Nicanor was dedicated to Sumner, with the claim that the notoriety conferred by the prosecution had rescued Cabell’s commercial prospects as a writer. He called Sumner a “philanthropic sorcerer” whose “thaumaturgy” had not only generated public interest in Jurgen, but resurrected prospects for the author’s other books (11-13). The hilarious little story of Taboo is set in the country of Philistia where it is the height of indecency to speak of eating, and a writer is accused of the “very shameless mention of a sword and a spear and a staff,” culpable since “one has but to write ‘a fork’ here, in the place of each of these offensive weapons, and the reference to eating is plain” (26).

The sword and spear and staff were in reference to Chapter 22 of Jurgen, “As to a Veil They Broke,” which Cabell had in large measure lifted from the Gnostic Mass of Aleister Crowley, and Cabell also mentioned these weapons in his later “Judging of King Jurgen” episode, where the tumblebug Philistine prosecutor indicted Jurgen as “indecent for reasons of which a description would be objectionable to me, and which therefore I must decline to reveal to anybody.”

The entirety of Taboo is an attack on hypocritical pearl-clutching regarding sex. Its satire is constructed around a conceit in which eating (a human activity no more essential than sex, if perhaps more frequent) receives the sort of conversational proscription that Cabell’s contemporaries sought to impose on sex. Still, an appreciative reader must admit that such constraints led Cabell to write some very entertaining prose. These are not limited to the absurdities of Taboo and the literature around Jurgen, and they include the clever and hilarious encounters with the cult of the Holy Nose of Lytreia and that of the shaggy goddess Koleos Koleros in Something About Eve.

Anthony Comstock figures in the tale as “St. Anthony Koprologos” and Sumner is himself “John the Scavanger.” The set-upon protagonist of Taboo is not Jurgen but the Cabell alter-ego Horvendile, whose writings are “suspected of encroachment upon gastronomy” (30). Throughout the text, the reader may profit further by converting references to eating back into references to sex, for another, more familiar-seeming, but still equally absurd story.

Even though it concludes with a lament for the persistence of moralistic censorship, Taboo was a very amusing victory lap for Cabell and McBride.