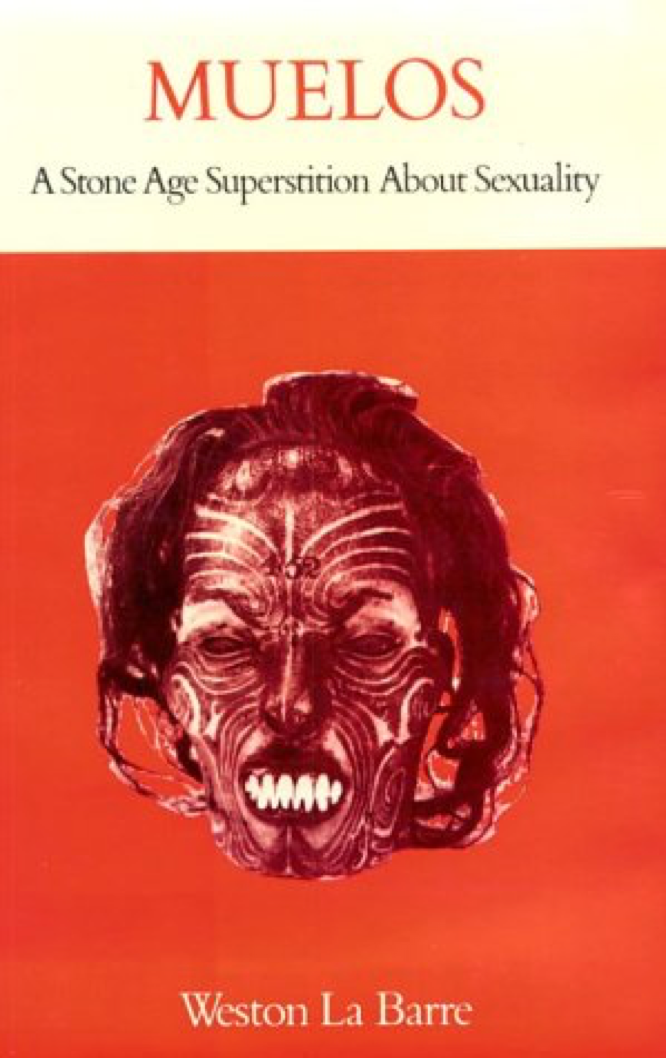 Although American psychological anthropologist Weston La Barre doesn’t reference their work, he is clearly advancing the tradition of the 19th-century phallicist scholars of religion. The title of his monograph Muelos is a Greek word for “marrow,” referencing a single substance in primitive physiological thought, the pith or spunk, which is cerebro-spinal fluid, semen, and bone marrow alike, supposed to be the material basis of vital generation. Although this book is short, it displays an impressive diachronic arc throughout the existence of the human species to the present from the paleolithic–and even earlier, when he speculates that cerebrophagous Australopithecene erectus may have had “the belief that semen is held in the head” (131).

As the author emphasizes from the outset, the ubiquity of the ideas that he’s treating here is notable only in combination with their empirical falsity. He proposes that they be considered an archosis–the term formed by analogy to “neurosis” and “psychosis”–an inherited pathology of cultural ideation. This particular archosis is supposedly responsible for anti-sexual moralities, but also for tribal headhunting, Platonic philosophy, and Hindu Tantrism. The connections are not as far-fetched as may at first appear.

The twentieth century’s premier sex magician Aleister Crowley set himself overtly against latter-day manifestations of this archosis, writing that “The misunderstanding of sex, the ignorant fear like a fog, the ignorant lust like a miasma, these things have done more to keep back humanity from realization of itself, and from intelligent cooperation with its destiny, than any other dozen things put together” (commentary on CCXX I:52), and in the same passage specifically opposing the perennial idea of muelos as finite capital: “But physiology informs us that we are bound to waste it, no matter what be our continence, so long as we are liable to sleep; and Nature, whether by precaution or by prodigality, provides us with so great an excess of the substance that the reproduction of the human race need not slacken, though the proportion of men to women were no more than 3 to the 1000.”

And yet the complex of notions and forms connected with the muelos archosis are themselves unflaggingly efficacious instruments of magick: the sacred head, the mysticism of the spine, the cult of the genius, the leverage of the general ideal over the particular phenomenon, the worship of the sun, and many others. Indeed, the “fiery talisman” is not itself a superstition, but rather the object of superstitious claims–errors in biological and metaphysical understanding alike. Nor should we assume that our current knowledge has exhausted its mystery. Lege! Judica! Tace!