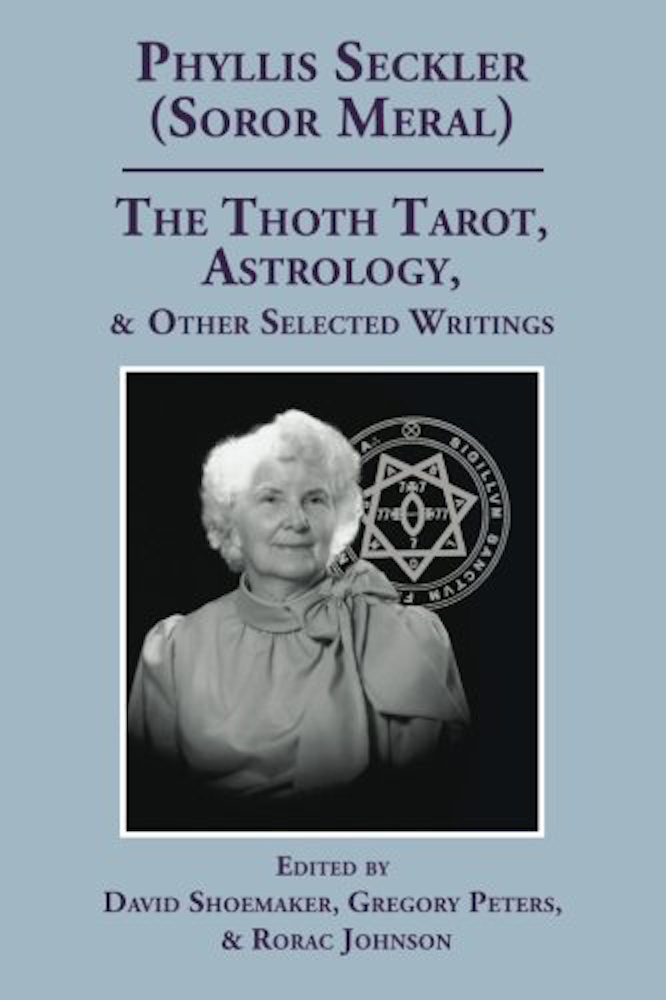 This beautifully bound book is obviously intended to enshrine the work of Thelemic initiate Phyllis Seckler as an occultist legacy. It is issued by the College of Thelema of Northern California, a successor organization to the school that she organized herself, and thus also serves to bolster their own pedigree.

The two treatises on the Thoth Tarot in this volume were each previously serialized in the College of Thelema journal In the Continuum. The first, on “The Thoth Tarot and Psychology,” is very much a matter of Jungian analytic psychology, uninformed even by other aspects of the psychoanalytic tradition, let alone more diverse modern schools of psychology. It takes the surprising but therefore illuminating approach of treating the Trumps in ascending numerical sequence, i.e. the qabalistic path of creation rather than initiation, in order to chart something like a developmental narrative. Seckler has made thorough visual contemplation of the cards, and calls out details I had never observed, although she also makes errors (such as taking the pelican in the Empress card for a swan). She occasionally presumes to explain quotes or passages from The Book of the Law, and these explanations are sadly not very inspired.

The second section, on “The Thoth Tarot and Astrology,” includes some useful charts synthesizing tarot and astrology according to Crowley’s development of the Golden Dawn hermetic doctrines. There is general guidance on astrology that is very much at a primer level. The main body of this text is a full survey of the sun signs, with the zodiacal symbolism illustrated through the trumps and court cards of the Thoth Tarot. It is entirely restricted to the most pedestrian sort of characterological astrology, and I found it an unenlightening chore to read. It has no satisfying summation or synthesis; it merely rehearses details through twelve signs and then stops.

The third section of the book is a collection of correspondence. The editors evidently had a much larger archive at their disposal, and the principles guiding their selection here are not made clear, nor is the sequencing of the letters, which is not reliably chronological. The antagonistic character of some of these letters don’t seem to reflect all that well on Seckler, but I am grateful to have access to them for the light they shed on the history of OTO and Thelemic magick in the twentieth century.

At the end there is a longish interview with “SM” (Soror Meral, i.e. Seckler) from the year 2000. It has some worthwhile autobiographical reflections from Seckler, but entirely too much chattering on from the interviewer regarding her own views of OTO and then-contemporary occultism. This interview is supposedly the last one recorded with Seckler, and there are moments where the full significance of her remarks seems to depend on tone and attitude that the transcript fails to communicate.