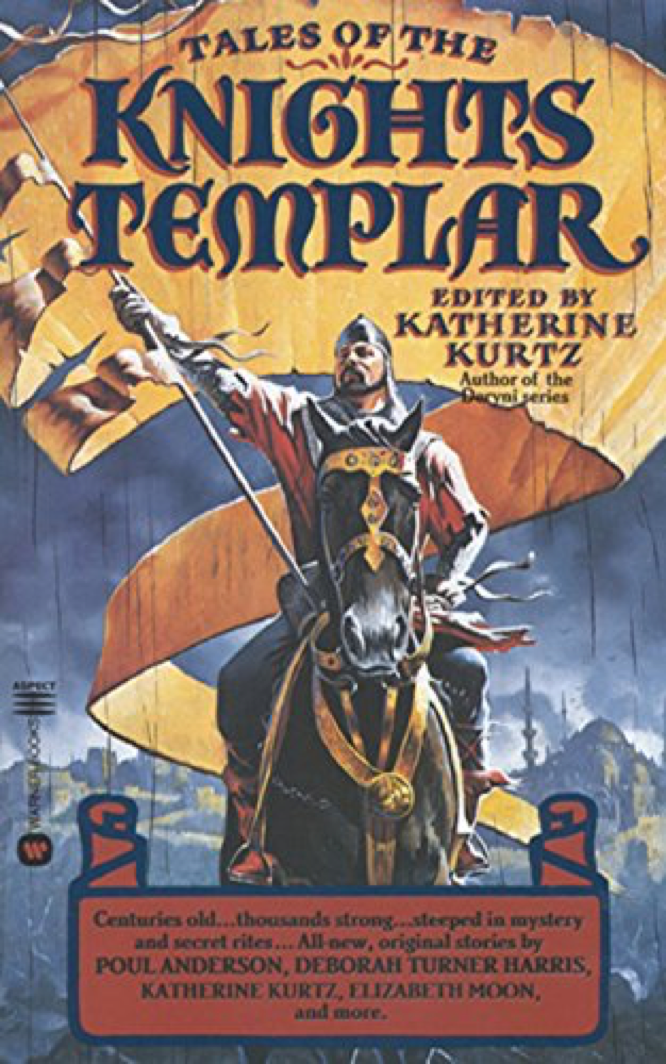 Here’s an odd little book that I picked up for a song at a Friends of the Library book sale. Although LibraryThing lists it as the fourth book of Katherine Kurtz’s Adept series, that applies to only one of the stories collected here. Similarly, although the entire volume is included as the third book of the Knights Templar series by Kurtz and Deborah Turner Harris, this book appears to be the first of those to have been published, and its contents span a full range of Templar history, quasi-history, and pseudo-history from the twelfth century to the present. The individual tales all have their first publication in this book, and they were written by what appears to be a loose cabal of contemporaneous authors, many with social ties beyond their collaboration on this project.

Kurtz serves as the editor, and presents the stories in a roughly chronological sequence–albeit somewhat muddled by instances of prophetic precognition, astral consultation of the past, and straight-up science fictional time travel. In between the stories, she supplies bridging “interludes” that address themselves to the broad outlines of Templar history as conventionally understood. She also wrote the story “Obligations” that is part of the continuity of her Adept series.

The quality of the tales is rather variable, but mostly quite good. Easily my favorite is “Choices” by Richard Woods, which affords a very informed take on holy orders and heresy in fourteenth-century Paris, with Meister Eckhart as a principal character. Tanya Huff’s “Word of Honor” was a slick trans-Atlantic ghost story. I was also impressed with the Nazi quest for Templars in Scott MacMillan’s “1941,” which reminded me of my recent read of Klaus Mann’s Mephisto, transposed to the register of a weird horror short story. The dog of the bunch was “Stealing God,” a Templar-flavored espionage urban fantasy that was basically a shorter version of Charles Williams’ War In Heaven with massive infusions of Hollywood-style stupid.

Although the facing-title page contains a small advertisement for the Templar-claimant chivalric and benevolent SMOTJ, I think this book should be entertaining on some level to Masonic and occultist neo-Templars as well. Although I’m hardly anxious to read them, I would pick up another book in either of the related Kurtz series on basis of the virtues in this one.