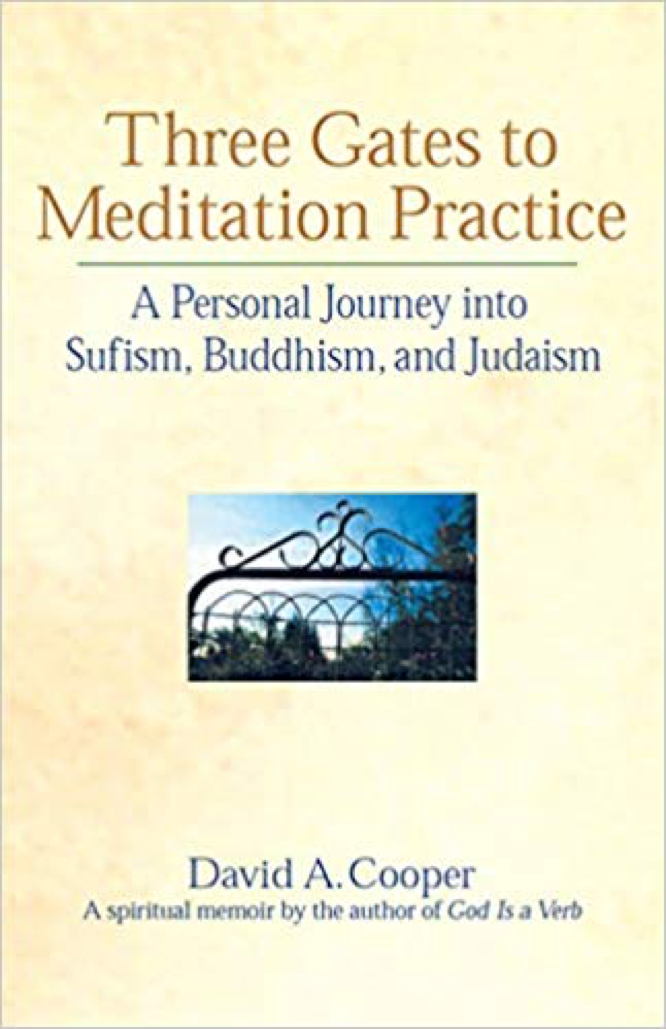 The title of Three Gates to Meditation Practice suggests that Sufism, Buddhism, and Judaism will figure equally as sources of mystical technique in its pages, but that is not the case. Judaism dominates the narrative of this memoir, which supplies an account of author David Cooper’s formation as a “post-denominational” mystic rabbi and a turn-of-the-millennium proponent of contemplative meditation in the context of Jewish “renewal.” And yet the original impulses for his meditation techniques were in his experiences of the two other religious traditions indicated.

Sufism figures as a source of inspiration regarding religious community and an initial orientation toward universalist mysticism. Although Cooper received formal initiation into a tariqah, Sufism has the lightest footprint of the religious traditions present in this book. The particular form of Sufism in which Cooper participated was the “Sufi Order of the West” of Inayat Khan and his successors, which is “eclectic and not bound to Islamic law” (6), favoring instead an emphasis on prayer and meditation inclusive of various cultures.

Buddhism for Cooper is largely a matter of technical resources for contemplative practice, and he is particularly enthusiastic about Theravāda Vipassanā (“insight”) meditation. Even after his Rabbinical ordination, though, he sought and received training in Tibetan and Nepalese dzogchen teachings of non-dualist realization. It appears to have been retreat facilities sponsored by Buddhist groups that provided him with mentors and contexts for the better part of his training and development as a meditator.

The memoir is full of excerpts from Cooper’s journals, set in italic type to distinguish them from the retrospective text. These are a healthy mix of “positive” accounts in which he describes his experiences of attainment and realization with “negative” ones detailing the stress and suffering involved in mystical practice. A distinctive feature of this book (and Cooper’s spiritual career) is the involvement of his partner Susan, who changed her name to Shoshana, converted to Judaism, married him, and increasingly participated in his retreat work. This situation forms a contrast to the usual solitude of the mystic biography.

Cooper has Jewish family roots, but was raised in a thoroughly secular manner by assimilated parents. David and Shoshana spent much of the 1980s living in Jerusalem and connecting with his Jewish heritage, although he was not sanguine about the political situation of Israel and eventually the social stresses drove them back to the US. He never seems to thoroughly identify with the doctrinaire intellectualism of Jewish orthodoxy, and his relationship to kabbalah seems to involve a reasonable amount of reinvention, but his connection to Judaism is evidently sincere and dynamic. The account of his rabbinical ordination (180-3) is quite moving.

On the evidence of this book, I feel comfortable regarding Cooper as an adept. Although he does not frame them as such, he supplies accounts of his proleptic visions (19-20, 23) and his Knowledge and Conversation of the Holy Guardian Angel (171-2). His term of art for the augoiedes is the “inner mentor.” It doesn’t appear that he had (in the twentieth century anyhow) undergone the Adventure of the Abyss, but he did have a vision (191-2) corresponding to the War of the Rose and the Cross as presented in the 4th Aethyr of Liber CDXVIII.